[See: “Fox” news—uprising in the henhouse as consumer groups move to take back Hawaii healthcare (3/19/2012)] 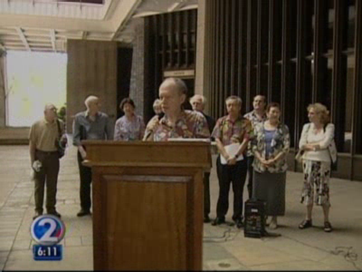 It was a long slog, but it is nice when the legislature, even one key committee, agrees with consumers instead of with big business. It does happen, and it happened yesterday. It involved lots of community organizing, speaking with some legislators, writing testimony, and attending a hearing for most of Monday.

It was great to work with a group of people so dedicated to standing up for consumer rights.

Today the House Committee on Consumer Protection and Commerce adopted significant amendments to SB 2434, SD1, HD1, to provide greater consumer protection and public transparency for Hawaii's health insurance exchange board (aka the Hawaii Health Connector). With Vice-Chair Ryan Yamane presiding, the Committee agreed with consumer advocates to exclude insurers from the Connector due to concerns of financial conflicts of interest. The amended bill will require the Connector board, which operates as a non-profit, to implement rules similar to Hawaii's sunshine law. The committee removed language that split the individual and small business markets which consumers argued could lead to higher premiums.

“This is a milestone for consumers, small business and the uninsured. The Committee transformed SB 2434, which was stacked for insurers, into a pro-consumer bill,” said Hawaii Coalition for Health spokesperson Rafael del Castillo.

The full Senate will be considering confirmation of Governor Abercrombie’s nominees to the Connector board on Friday, March 23rd. The list includes representatives from three health insurers--HMSA, Kaiser Permanente, and Hawaii Dental Service.

Consumer advocates are asking the public to call the Governor and Senate members to urge them to eliminate the insurance representatives from the appointee list.

It’s not a done deal yet. You can bet that the insurance reps and lobbyists also stayed up late last night, plotting countermeasures.

The media release calls for public action. What is really needed is testimony for the Friday confirmation hearing against each of the three insurance company appointees to the Hawaii Health Connector board. It’s easy to do. Just click on the left near each name and then push the Submit Testimony button at the top of the page. Again, the hearing notice is here.

I have some sympathy for the problems poor Governor Abercrombie is having with his nominees, but it would be great if he would replace these three names.

Or, if he would just ask them to withdraw. In order to spend more time with their families, of course.

You can call his office and make that request at 586-0034. Don’t worry, the gov himself doesn’t answer the phone.

[Speaking of the governor’s problems with his appointments, Star-Advertiser columnist Richard Borreca listed them up in his article today, Instability has become constant for governor (Star-Advertiser, 3/20/2012).  If you subscribe, have a look at that article.

After reading through Borreca’s list, I don’t think the gov would mind much if he had to withdraw three more names, it would just be a drop in the bucket. Yeah, things have been that bad.]

Just in case he doesn’t do it, though, please consider submitting even short testimony on the three insurance-industry nominees who have such a clear conflict of interest. They will be replaced with consumer advocates if the revised bill becomes law.