Contemplating violence? Who, us?

Civil Beat reporter Chad Blair posted a comprehensive article this afternoon which includes copies of the Kokua Council and League of Women Voters complaints: Sen. Roz Baker Blasted Over Hearing Conduct (Civil Beat, 3/27/2012).  It even has a picture of me! 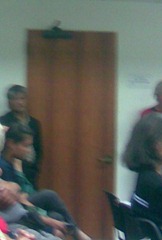 Speaking of pictures, the shadowy and out-of-focus figure at left is the Senate Sgt. At Arms, lurking in the hearing room on Friday. Sorry about my cheap cameraphone. Now, I doubt that he has much of a personal interest in who sits on the Hawaii Health Connector board. It’s also the first time that I’ve seen “protection” called to a committee hearing. And while generally a nice guy, afterwards several of us discussed our feelings of intimidation—he was obviously there to control us advocates. Why intimidation? The news of a settlement for an assault situation he was involved in was fresh in our minds:

On April 29, 2010, activists Mitch Kahle and Kevin Hughes were assaulted by Ben Villaflor, the Senate Sergeant-At-Arms, and State Sheriff's Deputies, for objecting to unconstitutional Christian prayers used to begin each session of the Hawaii State Legislature.

So who called him in?? Hmm?? And why did Senator Baker need this kind of protection? Would he have violently removed any of us if she asked him to? (Actually, I could use a nice settlement like that…).

I submit that the presence of the Sgt. at Arms contributed to the hostile conditions of the meeting that two of us complained about.

Lol. No wonder that guy is having a bill written HB2751(same for senate SAA too, maybe) to have arresting powers. Must have a chip on his shoulder.
Sometimes these people get so attached to their positions and legislators they fail to remember it is a public servant position and they can easily be replaced.
I donʻt know who was behind HB2751 but it reeks of preferential favors. Maybe it was House bill first so no one would know where it ORIGINALLY came from. This bit of news sheds some light on that.