If the world were really to end in 2012, how might that happen?

If the world really did end in 2012, as Mayan calendar doomsday fans predict, how might that happen? UFOs landing? The Apocalypse? A Newt Gingrich victory in November elections?

Well, we are due for a peak in solar flare activity later this year. There is always the possibility of a really big storm reaching earth. The IEEE Spectrum February issue cover story notes that powerful solar storms hit our planet in 1921 and before that, in 1859.

The 1859 event was the more severe, but the planet was not criss-crossed at that time with electrical power grids fed by vulnerable nuclear plants. The worst thing that happened was likely that some telegraph operators found they could operate without batteries for the duration (perhaps the first known large scale harnessing of solar power for electricity??).

What would a really bad solar storm look like?

Luminous fingers of intense red, green, and violet light flicker and pulse across the northern and southern skies like a vast cosmic conflagration. Within minutes, millions of people are tweeting, texting, and blogging about the wondrous sight. But then the sky turns a deep blood red, and fascination turns to panic.

Linked to the celestial spectacle are enormous fluctuations of the magnetic field in Earth's magnetosphere, which are causing immense flows of electric current in the upper atmosphere over much of the planet. Those huge currents disturb Earth's normally quiescent magnetic field, which in turn induces surges of current in electrical, telecommunications, and other networks across entire continents. Streetlights flicker out; electricity is lost. A massive planetary blackout has occurred, leaving vast swaths of North and South America, Europe, Australia, and Asia without power. 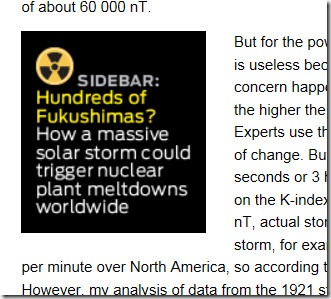 That’s only the beginning. The article predicts that transformers could be destroyed throughout the electrical grid, and that nuclear power plants could be at risk of meltdown everywhere. And then…

Within a few months, the crisis has deepened. In many areas, food shortages are rampant, drinking water has become a precious commodity, and patients in need of blood transfusions, insulin, or critical prescription drugs die waiting. Normal commerce has ground to a halt, replaced by black markets and violent crime. As fatalities climb into the millions, the fabric of society starts to unravel.

Solar activity peaks on 11-year cycles, and there is no predicting when such a storm might impact earth as described. The article suggests a certainty that a strong storm will occur one day, it’s just that we don’t know when.

It also suggests that we have done nothing to prepare. The author proposes preventive measures—but will we go to the trouble or expense of protecting the grid against an unpredictable event occurring 150 million kilometers off in space?

I can’t imagine that anyone will question the Republican presidential candidates about their plans to harden the country’s electrical infrastructure: “Mr. Santorum, will you protect our country’s power grid by installing devices to bypass dangerous ground currents induced by solar storms?”

There’s no paywall on the IEEE website—check out the Spectrum article at the link above. It’s not highly technical, and after reading it you may want to lay in a larger supply of bottled water and batteries in your emergency kit just in case the Mayans were right.