The “disappeared news” about the Afghanistan war


"Senior ranking U.S. military leaders have so distorted the truth when communicating with the U.S. Congress and American people in regards to conditions on the ground in Afghanistan that the truth has become unrecognizable. This deception has damaged America’s credibility among both our allies and enemies, severely limiting our ability to reach a political solution to the war in Afghanistan."

The pull-quote above is from a must-read Rolling Stone article that is available on-line: The Afghanistan Report the Pentagon Doesn't Want You to Read, (Rolling Stone, 2/10/2012). Check it out. 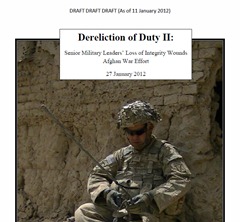 Links in the story will take you to a classified report and several other related articles.

From the Democracy Now interview with the author of the Rolling Stone article:

Now, what Colonel Davis is reporting and what we’ve seen from every other report is that, in fact, all this money we’re spending is—much of it’s going to waste. There’s pervasive drug problems, Taliban infiltration—you know, you go down the list—discipline problems, people not showing up. So, in fact, there’s an amazing moment in Colonel Davis’s report where he says that almost all the Afghan forces that he visited have different pacts themselves with the Taliban about—so they don’t actually want to fight each other. So, what does that tell you, right? And I witnessed that firsthand in Afghanistan, where I was with an Afghan unit, and they knew the Taliban would attack, because one of their friends in the Taliban would call and be like, "Hey guys, we’re attacking tonight."