Can you testify on an amendment you haven’t seen? Rep. Bob Herkes, Chair of the House  Corporate Consumer Protection Committee believes you can. To prove it, he has resurrected a dead bill over this Super Bowl weekend. Your action is needed to drive a stake into this bad bill.

Since there may be little testimony against the bill, the Chair will direct his committee members to pass it.

Whatever it says, we, the people, haven’t seen it. We’re being swindled.

Why should you testify? There are some emails circulating. A snip:

Your Free Speech is at Risk! As many of you know, Public Access Television is under a huge threat! For Oahu, Olelo Community Media will have to shut down its community media centers and suffer a 67% funding cut. The public's ability to have an alternative voice will be shut down and Hawaii's corporate media dominated airwaves will prevail. Of course, this may be because we have been so successful in using public access TV to call attention to important issues.

Public access television must be very effective to warrant this devious action to shut it down. Help protect Free Speech in Hawaii! Oppose HB2652!

This is a dirty trick, folks, and the public is the loser if CPC committee members don’t stand up to their powerful chair. See the end of this article for talking points and contact info for committee members.

Strange things can happen at the Hawaii State Legislature when no one is looking. This Super Bowl weekend was a great opportunity for shenanigans since the public attention would be on the game, not on the heist.

There are several bills this session that threaten public access television. One was HB2652 that would have cut the funding to `Olelo, Akaku and all public access television by two thirds. The bill was introduced by Big Island Representative Herkes and scheduled for a hearing without much time to get much testimony organized. Despite that, testimony appeared, most in strong opposition to this bad bill.

So the Chair deferred the bill.Yay! Dead so soon, no need to follow it though the Legislature.

“Deferred” almost always means “dead.” But veteran Capitol watchers know that nothing is really dead until the final gavel is struck in May.  And so, new life was somehow poured into this bill, out of public view. It became a “zombie,” set to walk again on Monday with the public not aware of the new language.

This is pretty clear. The public has been given notice that decisionmaking will take place on Monday. Note that this zombification took place on Friday. But no need to testify, the public notice is for decisionmaking only. Right?

Not! This is from the bottom of the hearing notice: 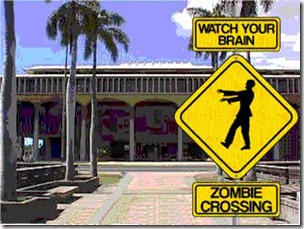 It’s all crossed off, maybe because it’s a zombie and is not technically alive. Is there still a referral to FIN? That’s crossed off. What does the proposed HD1 say? Who knows.

It’s ridiculous asking for testimony on an amendment that no one has seen and hiding the request as CPC has done.

You can help drive a stake through the heart of this bill. From the circulating email, here is what you can do, but act quickly, as they say:

Go to this URL. Type in your opposition to the bill.

Here are some talking points, adapted from the circulating email, but better to use your own words. Don’t just cut-and-paste or they’ll ignore it.

Here is contact information for members of the CPC committee. Please call/email any or all of them on Monday, as early as you can, but call before about 2 p.m. at the latest. Leave a message opposing this. If one of these representatives is your representative, please say you are a constituent.

Not just Olelo! But also the public access stations on the neighbor islands who will be hit even worse since the little budget left over is not adequate to keep even a zombie alive.


Thanks for doing that article and being a great outspoken zombie fighter. Links to this article were sent out all over on twitter. It helped to tie down the zombie in CPC.


Hey, we fight rats in Chinatown and zombies at the legislature. If you discover any evilness, let us know. Disappeared News has always depended on info and leaks concerned people send in. You can email leak [at] disappearednews.com or just tweet to @disappearednews .