Eliminating the middleman—buying direct from China

It seems that most everything is made in China these days, regardless of the logo on the front. Turn an American-brand item over and it says “made in China” on the bottom. China has quickly grown to be the second largest economy in the world and has largely displaced some segments of American manufacturing.

Most readers are probably aware that iPhones are made in China, in apparent sweatshop conditions, by a company called Foxxconn. Why?

Suddenly, the light in the factory was turned on.

"A foreman immediately roused 8,000 workers inside the company’s dormitories, according to the executive. Each employee was given a biscuit and a cup of tea, guided to a workstation and within half an hour started a 12-hour shift fitting glass screens into beveled frames. Within 96 hours, the plant was producing over 10,000 iPhones a day," NYT reported.

This is how one million iPhone could be sold within three months.

American workers are not needed as much these days by corporations. That’s why “corporations are job creators” is a joke, even if repeated endlessly by Republican presidential candidates during the travelling circus the media calls the “debates.” “Jobs” is the refrain on both sides of the aisle, and even President Obama toots the “jobs” horn as he campaigns for a second term.

Jobs that have gone to China or India (as examples) are not very likely to return.

Corporations can make plenty of profit just by selling us stuff that’s made overseas. We are still needed as consumers, at least for a while. 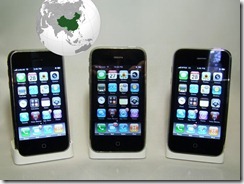 It may be possible soon to turn the tables on these companies. Increasingly, electronics, lighting, gadgets, and some clothing can be ordered on the Internet directly from China. There’s no “Sears catalog” quite yet, but can it be far behind? Cell phones, Android tablets, even high-tech bladeless fans can be ordered direct. Yes, it’s possible to skip the middleman, or at least, the USA middleman. When ordering direct, payment is in US dollars, often via PayPal. The postman brings the goodies to your mailbox.

LED flashlights and lighting are made in China anyway, why not order your CREE Q5 flashlight from there and save the markup? The light is bright and penetrating. The LED should be long-lasting.

Admittedly, cellphones and tablets are generally inferior to what we may be used to. The Chinese tablets don’t compare yet to the iPad or the Galaxy. The price, though, can bring a tablet into the affordable range and make it possible for every family member to have one. No more fighting over the iPad. If the kids break one, well, the replacement isn’t expensive.

Both the tablets and cell phones commonly have features that comparable products sold here don’t have. Dual SIM cards mean that one phone can have both a business and personal phone number without carrying around two of them, and their phone books can be merged. Tablets have HDMI outputs, micro memory cards, USB ports, Ethernet ports, and other features that may not be available at all on domestically-sold products. Check reviews, if available—some also may not work.

Right now, it looks like it’s necessary to take a risk and order via the Internet. For some websites, the risk is minimized if they maintain a store on eBay, because eBay backs the purchase. Some other sites provide a 1-year warranty of their own, sometimes paying return postage.

I’ve only started my China-shopping experience, but there are a few things I can report.

For flashlights, some funny electronics (headphones, microphones, multimeters, breathalyzers, pocket watches, weird hairpieces, tattoo machine parts, fingernail stuff and lot of automotive LEDs and test interfaces), check out stores.ebay.com/etopauction, for example. They have CREE Q5 and Q6 flashlights with various options. You’ll notice some similarities: most take three AAA batteries in an internal plastic cartridge. Some offer the cartridge or a rechargeable lithium-ion battery. There’s a quirk to that Li-ion battery though—you’d need to buy a charger if one isn’t supplied. And then you learn that some Li-ion batteries of that size are “protected” and some not. The “protected” ones won’t overcharge, etc.  The brightness of these flashlights is awesome, and there’s no bulb to change, ever. I got one with 240 lumens that focuses from a spot to a flood. It has a high-low-strobe switch. I could do without the strobe, but in an emergency, it might be useful. That one stays in the glove compartment. It’s easy to throw three spare batteries in a plastic bag in there also, as backup. I’ve been satisfied with my few purchases—they come in a couple of weeks right to the mailbox, and when I did have trouble, they refunded my money promptly rather than take back the defective product.

Try them for tools to open your watch and change the battery, and you’ll save money over paying a watch shop to do it. They even have a few types of batteries. Lots of magnifiers with built-in LED lights. An IR remote for your laptop when you do presentations, instead of tying up a human being to push buttons for you. Incredibly cheap Bluetooth headsets that work well enough.

A popular site is DealExtreme.com. This one pretends you are getting a discount over the usual selling price, but of course it is fictitious. For any of these sites, add the selling price to the postage cost, if any, and that’s the basis for the purchase decision. This site has all manner of useful and weird gadgets, lots of protective covers for your iPhone, toys, and so much more that it is kind of a “Sears catalog” already, but for things that can be easily mailed. They offer a warranty. I bought a 4.3” video player that was very cheap. It did last a while, but one of the buttons stopped working. No questions asked—they are shipping a new one, and paid my postage to return the defective item.

An alternative to DealExtreme is DinoDirect.com. This site has more of an emphasis on clothing, but you’ll also find telephoto lenses for your iPhone, plenty of watches, and the usual electronics. Check prices carefully, though. I’ve seen the same items for less at one or another of the other websites. This site has equipment at higher prices, and one hopes, correspondingly higher value, than some others.

When I had to purchase a new desktop computer unexpectedly, it required a digital cable to connect to the video monitor. HP did not supply the cable, and it was the Monday after New Years, so I had a hard time finding one. Only one local store had one for $26 and change. You can get one from Monoprice.com for just over $7 including postage. That’s the website to go to for USB or HDMI cables and more, in an impressive range of lengths and colors.

SPEmall.com looks promising for China-made tablets. They seem to mostly have Android versions 2.2 or 2.3, but some are or can be upgraded to 4.0, and they provide help in doing that.  A tablet with a 0.3 megapixel camera could clearly be a disappointment, but those are the low-price end of the spectrum. The hot new Meizu cellphone with the 5.0 mp camera is out, but it’s pricey.

You can afford to get the grandparents a 10.1" tablet that’s easy on the eyes for much less than an iPad if they have wireless in their home and don’t need the 3G or 4G connectivity.

Chinavasion.com (is that “vasion” as in “invasion?”) looks promising, I have no experience with them. I just spent about four minutes this morning drooling over a cellphone watch that I really don’t need but was curious about.

There are plenty of other websites. I don’t mean to endorse any in particular. Even Amazon sells Chinese-made tablets, thus reducing a bit of the risk while adding back the middleman.

One day there might be a China store in Kahala Mall across from the Apple Store. I believe the day will come.

Of course, the biggest market for Chinese-made electronics is China itself. Looking further into the future, should the 99% of America that now makes the other 1% rich lose its buying power, it may not matter. Apple could just turn around and sell their iPhone to overseas consumers, and the heck with poor us.  Apple, a very rich and successful company, doesn’t need us as workers right now, and maybe they wouldn’t care if we ceased to be consumers later on.

Anyway, you have a chance to play in a new sandbox, the mysterious world of direct purchase from China via the Internet.

Be very careful. The sandbox has some very unpleasant surprises....like the kind the kitty cats leave. I used a direct China site before Christmas knowing I was taking a chance. Half the order never arrived though I was refunded. The fancy flashlight had no battery and none were available here. Other items were so cheaply made I worried they would break . Other items were broken because they threw all into a plastic bag to ship...no box, no packing material. I ended up throwing most of the order into the trash.


I have had one item arrive broken. They refunded my order immediately. As to the flashlight without the battery, it was probably the same type that I mentioned. They are available with or without batteries since apparently some people already have some batteries and the charger. They would not want the "unprotected" battery that normally ships with the CREE flashlights.

I suspect that as time passes some sites will stand out for reliability and others will get panned for shipping junk. It's only the first inning in the game.


Oh, check out the cheap toaster ovens at Don Quijote. I tried twisting a knob on one, it fell off in my hand. There's crap everywhere these days. It's sad.