If an accused murderer is free to travel, then Roger Christie must be a political prisoner in Hawaii 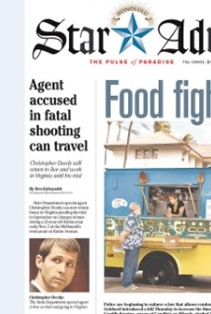 When I saw this story on the front page of today’s Star-Advertiser, I thought immediately of Roger Christie, languishing so far 17 months in the lockup.

A judge has ruled that a federal agent charged in a fatal shooting at a McDonald's restaurant can leave Hawaii and return to his home in Virginia while he awaits trial.

The Honolulu Star-Advertiser reports (http://bit.ly/s782t3) that Circuit Judge Karen Ahn on Friday agreed to modify bail conditions for State Department Special Agent Christopher Deedy so that he could return home and work at a desk job with the department.

The 27-year-old Deedy is charged with murder in the shooting of a 23-year-old Kailua man at a Waikiki McDonald's on Nov. 5.

Here’s a guy charged with murder who is being allowed to return home to work at a desk job.

Roger Christie is charged only with growing, selling and possessing pot. Well, he also has opinions about what he does. He believes marijuana is a sacrament.

If an accused murderer is free to travel, and a man accused in Hawaii of trafficking perhaps hundreds of Thai farm workers has been home with his family in Los Angeles, able to celebrate Thanksgiving and Hanukah, it seems reasonable to consider that Roger Christie is being held as a political prisoner in Hawaii. He has not killed nor trafficked anyone, but the feds want him behind bars. The other two they let out.

Anyone who cares about their own religious freedom ought to be outraged. Anyone who knows the Constitution ought to be taking up arms against this abusive system. At least get out and carry a sign for the release of Rev. Roger Christie.


Absolutely outrageous, that an accused murderer is allowed to travel.Should Judge Ahn be recalled?


Good call Larry, even the judiciary seems to be taking the people for idiots.