Dear Gov. Abercrombie: Just say “no” to any more “APEC”s in Hawaii

“When Hawaii bid for the APEC meeting, some in Washington questioned whether we could do it. Now Hawaii has emphatically demonstrated that it is a world-class host for events involving multiple high-level government, international organization and business leaders. We will seek more opportunities like this on the basis of this acknowledged positive record.”—Governor Neil Abercrombie (Star-Advertiser, 11/15/2011).

Somebody please stop him before he actually does this again.

The accounting hasn’t even started on whether APEC helped or hurt the tourism industry, which ships quite a bit of money out-of-state anyway. It sure hurt our quality of life and possibly hurt individuals and businesses economically to create this “acknowledged positive record.”

Early indications are the Asia-Pacific Economic Cooperation conference might not have drawn 20,000 visitors nor added $165 million to the economy as forecast, but it likely gave Hawaii something of more value: a new image.

The Star-Advertiser paywall is back up, so that’s all you can read of the lead story yesterday, but it’s probably all we need to know. So instead of reaping a huge economic benefit, we’ve now got  “a new image.”

It’s unclear if our state government will be able to do a profit-and-loss statement on APEC. Most likely we’ll feel it in our wallets down the line. I did check my wallet this morning, and so far, no APEC money has trickled in. If we face another difficult budgeting year during the 2012 legislative session, it will be important to know how much APEC contributed to it.

Will social services be cut back further due to APEC losses? Was it neutral? Was there a profit, and who got it? Tax effect? Security costs? Who will answer the questions?

The buck seems to stop at Abercrombie’s desk, particularly if he plans to seek similar “opportunities” before the red ink has dried on this one.

Impact on local business could be negative

Three tourist trolleys that passed me on Beretania Street on Friday were almost empty, only 3-4 passengers getting the tour.

Attendance at the KCC Saturday Farmers Market was way down. Produce vendors actually didn’t suffer because locals are dedicated to their weekly fresh veggie hunt, but tourists were noticeably fewer. This must have hurt the prepared food vendors (pizza, fried green tomatoes, sausages, corn-on-the cob, etc.) who depend on the tourist hoards lining up to buy what was featured in their guidebooks back home. APEC visitors did not behave like typical tourists.

Saturday looked bleak at the Costco gas station. In mid-day we drove directly to pump. Usually it would have been a bad time to gas up, with cars queued almost to the sidewalk. According to a Costco employee who will remain anonymous because I forgot to ask his name, it was like that all day, and business had been very light all week. Drivers weren’t buying gas. That suggests, of course, that they weren’t going anywhere.

Inside Costco, the crowd was thin. It felt more like a weekday. The checkout clerk confirmed that business was way off the norm. Costco is nowhere near locked-down Waikiki, yet it was affected.

After shopping we visited a Thai restaurant we hadn’t previously tried, for lunch, Thai Village down Dillingham near Kalani Street (recommended: they’ll serve spicy if you request it, and they use fresh ingredients from local farms). Only two other tables were taken. We had our choice of several open parking places, unusual for that mini mall.

The losses probably extend beyond Waikiki businesses which found themselves cordoned off by APEC security. The impact may not be easily quantifiable, unless tax revenues for the month show a dip. True, the slowdown was only a week or so, but we haven’t yet seen any numbers. Nor did Abercrombie’s op-ed yesterday (see below) apologize for APEC’s impact. Quite the opposite, he suggested whipping us again.

Many of the advantages claimed by the gov had nothing to do with Hawaii as a venue. APEC could have done its business as well in Zanzibar or Lake Woebegon.

It’s not yet clear how local high-tech business benefitted from the exposure. Sopogy announced an MOU, details still unknown. Another high-tech darling, Hoku Scientific, rated this article credited to “Advertiser Staff” but apparently based on a press release:

"To be a long-term market leader in the polysilicon industry, Hoku needs to maintain a globally competitive cost structure," Paul said. "We are in the process of conducting a feasibility study for a further expansion to 8,000 metric tons to achieve better economies of scale. ... We believe that the additional investment necessary to expand our plant to 8,000 metric tons will be proportionally less per metric ton of capacity than what we have already invested in our 4,000-metric-ton plant."

Hoku also plans to expand its business by marketing in North America photovoltaic modules made by Tianwei New Energy, a Chinese company.

The “Advertiser staff” failed to mention that  Hoku is a Chinese-controlled company, specifically, Tianwei New Energy, mentioned in the article as an apparent supplier, controls them (see: Chinese company takes over Hoku Scientific, Pacific Business News, 9/29/2009). And, of course, the jobs Hoku is creating are not in Hawaii but in Idaho.

The lesson that the story omitted giving is that showcasing local high-tech business to APEC visitors could mean that they no longer remain Hawaii businesses. So would that be a positive for us from APEC, should it happen, or a negative? Have we lost any businesses because of APEC? No news yet. Perversely, would a lack of interest be considered an APEC failure?

APEC took a toll on quality of life

The trials and sacrifices of Waikiki residents and tourists have been documented, but the APEC impact extended beyond the Waikiki enclave.

Traffic was weird even before APEC dignitaries arrived this weekend. But while big shots raced along the closed H-1 at speeds likely well in excess of the speed limit, the rest of us were stuck at a dead standstill. H-1 overpasses were closed for up to an hour or so at a time, so there was, in effect, no way to get across. Around the H-1, it was just one huge parking lot.

Here’s the view along Nuuanu Avenue. The intersection with School Street was closed when this pic was taken, and remained so for about an hour. There was nothing to be done but to wait, although one [expletive deleted] driver felt that leaning on the horn might somehow get things moving. 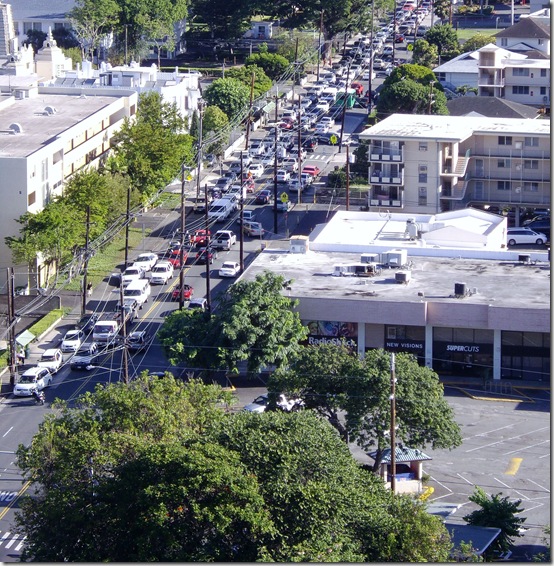 Here’s the view of cars coming from the Kalihi direction along School Street. The bridges were closed entirely for the duration, even when there were no convoys in sight on the highway below. 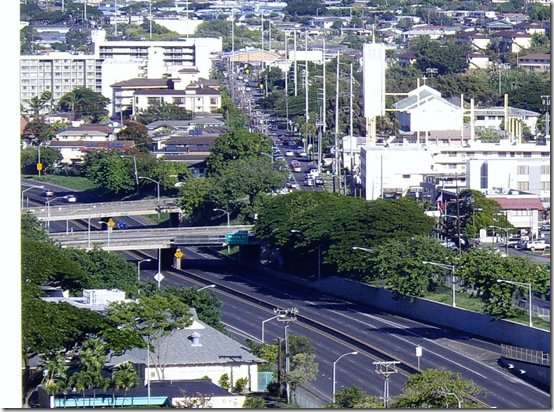 Do we want another “APEC” in Hawaii? 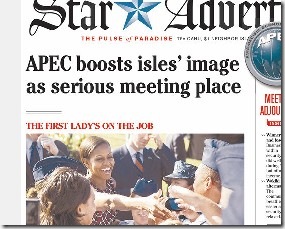 What does “serious meeting place mean”, and will tourists still come for vacations and weddings if we do this again and again?

Hawaii has always been good for serious meetings. Just not as serious as this one. There is such a thing as excess. Or is serious used in the sense of serious injury? Just kidding. No, I’m not.

The question of can we afford another APEC is still open. In an op-ed in yesterday’s paper, Governor Abercrombie seems to be backing off of the direct monetary claims. 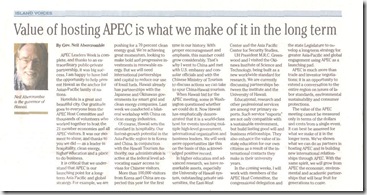 APEC is much more than trade and investor negotiations; it is an opportunity to extend a conversation to the entire region on issues of labor standards, environmental sustainability and consumer protections.

The value of the APEC meeting cannot be measured only in terms of the dollars and cents from a single event. It can best be assessed for what we make of it in the longer term. We've shown what we can do as partners in hosting APEC and in building new international relationships through APEC. With the same spirit, we will grow from APEC the economic, environmental and academic partnerships that will bear fruit for generations to come.

For this “conversation,” do we want military blocking our roads, paralyzing traffic holds, restrictions, barriers, loss of business?

And does the gov realize that the TPP (Trans Pacific Partnership) deal negotiated in part at APEC is designed specifically to reduce or eliminate “labor standards, environmental sustainability and consumer protections” because those things are impediments to “free trade?” Similar arrangements have made it impossible to label a can “dolphin-safe tuna,” for example.

So do we want more “APEC”s to be held in Hawaii? I don’t think so.

It will be up to our governor to turn away any future “opportunities” such as we have just experienced.

Folks, Honolulu has been used. There may not have been extra call girls on the streets, but we have been prostituted ourselves. If the end product of the meetings held here last week are that rural families in Japan lose their farms and incomes, we will have been host to criminal activities.

These may seem like strong words, but trade deals in the past have resulted in uncountable deaths among ordinary people.

We need to assess the benefits and the damage of APEC 2011 before doing another one.

Many thanks, Larry, I think that Oahu taxpayers/businesses lost big time due to APEC. I finally ventured over the Pali on Tuesday after 9 days.I do have a better understanding as to why my ancestors came to Mass. in the 1600's to get away from the so called "privileged" idea."Privileged" a rather absurd idea! The security was overboard and unnecessary...No more such ventures. It's bad enough that Obama returns in Dec.