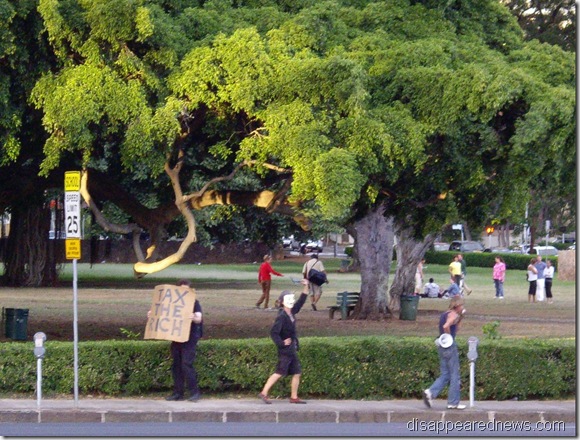 Yes, tax the rich. Somebody has to say it. The Occupiers pictured grabbed the attention of shoppers at Wednesday’s farmers market at Blaisdell.  Later, leaving the market, we passed an Occupy encampment on Beretania Street. Drivers were honking their horns in support, and the group was apparently threatening enough to the powers-that-be that they merited the escort of a couple of police cars. The Occupiers were on the sidewalk, the police were the disruption, blocking a lane of traffic.

I spent part of the day catching up on the movement. Yes, finally, we have a movement. And no amount of Koch brothers money can buy what it has achieved.

For one thing, it has brought solidarity and kinship to those participating. In the old days one could march on Washington, meet like-minded people, but very soon return home to school or to work. It was over when it was over for most participants. For Occupiers, they are spending as much time together as a military unit does. That’s the closest thing I can think of. Occupiers are  bonding, developing strategy, studying, caring for each other, protecting each other, and speaking out. They have lawyers, chefs, contributors, political scientists, linguists, librarians (and libraries) and medical personnel all working together towards a common goal of fixing this country.

Yes, tax the rich. Even some of the rich say they wouldn’t mind chipping in some more. It won’t hurt them one bit.

No wonder Occupy has Republicans and, well, anyone in power sucking off the corporate teat, scared.

I should write about the crappy job the Star-Advertiser is doing reporting on thei movement’s progress. Violence, which is rare outside of felonious assaults by the police, find ink in the paper. Achievements do not.

I learned from an Occupy Wall Street attorney how the NYPD acted illegally in throwing Occupier’s belongings in dumpsters. They are required to bag anything confiscated and keep it safe. I wonder if this applies to police actions in Honolulu. Can police really trash the property of homeless people?  I don’t know. I’ll check on it a bit.

The best source of Occupy news I have located is not print news but radio (there are also good sources of print news). Let me point you to the nightly news on WBAI-FM on the web at wbai.org. Usually a report from Occupy Wall Street follows the 6 p.m. news. To find these programs, locate the link to the station archives towards the right of the web page.

I just listened to tonight’s report. Those speaking introduced themselves by saying, “My name is ------- and I occupy Wall Street.”  One after another. Awesome. It may not sound like much to you reading this, but it was one evidence of the bonding that has taken place within the group.

They spoke of feeding 4-5,000 people in the park a traditional Thanksgiving meal. Who could partake? Anyone. They talked about the importance of everyone having access to good, nutritious food. How refreshing. Contrast this with our own Governor Abercrombie’s attempt to cut off food to those living in Kapiolani Park in order to get rid of them before APEC.

There is a medical tent, and I’m not sure what they do there, but heard another report last week that they do give medical care to someone who needs something.  Imagine that. Free medical care. Contrast that with our own government’s plan that basically enriches the insurance companies. And how many millions of people are now without medical care across the country? Can we count on Congress or our President to fix that? No. They’re not even talking about fixing all the myriad things that now threaten the 99%.

“99%” has caught on big time, around the world. We can all identify. Equally important, we can all participate in righting the wrongs. Now there is somewhere to go. Your nearest Occupy group.

Today, Occupations across the U.S. have shown that the 99% Movement can do more than protest—we can also take care of one another. Across the world, people still reeling from homelessness, poverty, foreclosures, and economic inequality have a lot less to be thankful for. But today, we reminded ourselves -- and the world -- that we can still be thankful for our mutual solidarity. From D.C. to Oakland and everywhere in between, Occupiers sat down for communal meals. Others marked Thanksgiving by honoring indigenous Native communities and First Nations who continue to fight for their land and sovereignty against colonialism and corporate greed.

In New York, Occupy The Hood dropped off hundreds of meals at shelters across Harlem, Brooklyn, and the Bronx. The OWS kitchen cooked enough warm meals for 4000 people and handed them out at Liberty Square. Meals were also delivered to churches that have sheltered displaced residents from Liberty Square and to the Occupations at New School and Rockaway. Following dinner, there was a spontaneous sit-in in solidarity with the many people who lost their place of rest when OWS was raided on November 15th.

[occupywallstreet.org, After Feeding Thousands, OWS Sits Down in Liberty Square, 11/24/2011]

Time to Occupy Congress. The changes will have to come through Congress and that means changes in Congress personnel...State by State!


I dropped by last night with some vegetarian food a friend had specially prepared for them, and caught up with them in front of Wall Mart on Keeaumoku. These people are obviously not some kind of whacko homeless encampment, but a group very intent on making a political point.

There is an ordinance pending before the Honolulu City Council, Bill 54, which allows the seizure of personal property that is unattended or attended. The police have been heard mentioning that this bill will allow them to close down Occupy Honolulu. Although Jon Van Dyke of the UH Law School has signed off on the constitutionality of the bill, the ACLU has submitted testimony to the contrary and has warned the Council of incurring substantial costs defending challenges to the bill.

There is also the additional issue of the bill's violation of the Kanawai Mamalahoe, the Law of the Splintered Paddle, which incorporated into the State Constitution guarantees the safety of those who lie by the roadside. I've always taken this to be kind of the equivalent of the first principle in the Hippocratic oath, "In the first place, do no harm." To me, the Kanawai Mamalahoe says, "in the first place, make no law harming those who have committed no offense." The criminalization of homelessness by the City of Honolulu is a shame. Although it may be difficult to craft laws that comply with the national and state constitutions, that is the job lawmakers are sworn to. If they cannot do so, they should resign. And at any rate, they should not continue to attempt circumvention of free speech, peaceable assembly, and the safety of our most vulnerable citizens.

I posted some quick links to Bill 54 and testimony etc. at my blog: http://bit.ly/rWqsik


Read up/speak up on Bill 54, soon-to-be city ordinance coming Dec. 7. Re: the removal and disposal of private property on public property for 24 hours, attended or unattended. Introduced by Tulsi Gabbard. We need a barrage of calls to the city and city council on this.