OHA Kakaako land deal may be all wet

I was surprised to see the choice of property that the Office of Hawaiian Affairs may be accepting as a settlement with the state. At first glance, it looks great—waterfront property. Who could argue with that?

Glance again. The property appears to be all, or almost all, in the tsunami inundation zone.

For a better view of the map, you’ll have to buy a  copy of the paper or sign up for their paywall.

Kakaako Park, with a hill in the middle, is the green area at the bottom. Around it is relatively flat ground. In a tsunami, the proposed tracts would seem to be in danger.

So it is possible that Native Hawaiians, as represented by OHA, are being scammed once again.

I write “again” after having sat through many hours of the Hawaiian Homelands trial in 2009 argued by attorneys Tom Grande and Carl Varady. After decades on the waiting list, many Hawaiians were given farm lands that were unsuitable for farming, and homestead tracts that were not ready for building upon (no sewers, etc.). In other words, while prime Hawaiian Home Lands were sold or leased for commercial purposes, the state offered the lowest quality lands to those entitled to the best (well, entitled to everything, actually).

Are the tracts included in the proposed settlement really junk? A tsunami will come one day. The area near the tracts is very unusual in how it was demarcated for evacuation, to start with. 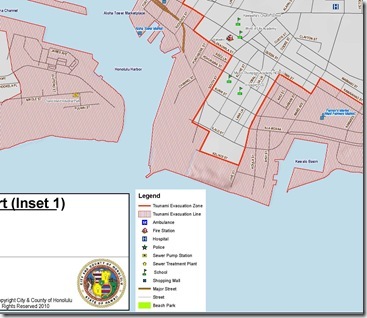 In the middle of a kind of peninsula is the University of Hawaii medical school and research lab complex. Now, the UH did the surveying used by Hawaii Civil Defense to establish the evacuation plan and the inundation zone. They did it with lasers that can measure the slightest changes in elevation. But if you drive around the area as I have, you’ll see that it looks very flat, except for the hill that fronts Kakaako Park. I have long wondered (and written) about concerns over locating a Level 3 Regional BioSafety Laboratory in that area, for example. The lab and the rest of the UH complex are in the grey “safe” area they have carved out on this map.

You won’t see a carved-out area like this anywhere else in the evacuation map. So UH did the map, but did UH cut themselves out of the danger zone? It turns out that there is logic to it, since the sides of the carve-out are developed streets suitable for quick evacuation.

With regard to the potential OHA tracts, let’s take a look now at the inundation map. I obtained it from UH with permission of Civil Defense. 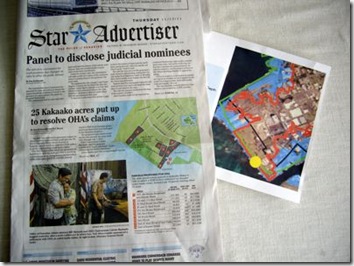 Here is a better pic of the inundation zone. You can click to get a larger image. 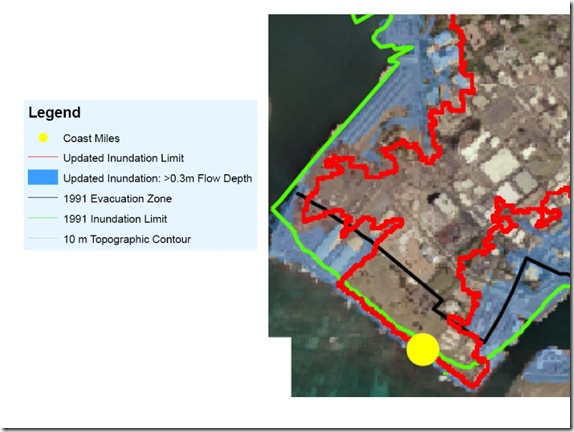 Now go back and look at the Star-Advertiser map. The lands to be given to OHA seem to be ground zero for tsunami inundation.

The Star-Advertiser article reports that “The land will be given to OHA ‘as is.’“ I see what they mean.

As a side issue, we see a similar attitude with the bogus Ho`opili ag land proposal. The proposed 250 acres, to the extent they are non-contiguous and criss-crossed with gullies and ravines, are no acceptable substitute for the fertile, expansive and productive farm lands they propose to cover with asphalt and concrete.

I will be submitting testimony to the Legislature, if they take this up, similar to the above.


Mahalo for you kokua in understanding this ... state giving land to OHA IS GIVING LAND TO state ... NO DIFFERENCE <<< Hawai'ian no get it ...

But it's an important part of the story, so I rescued it. Please check it out.

Each week, a couple of thousand people visit Disappeared News from outside Hawaii. I suggest that you click on that link. Also, visitors most often end up in Waikiki. Why not learn about its history?

This is from the intro to Waikiki : a history of forgetting and remembering, which you can find on Amazon.com.


The Waikîkî you encounter here, however, is not the
Waikîkî of advertisements geared toward tourists, which
promise a paradisiacal idyll free from the trials and tribulations
of everyday life. As this fantasy is told and retold,
Waikîkî’s real histories are willfully forgotten. Forgetting and
Remembering Waikîkî resurrects historical events to explore
a place fundamentally structured by trials and tribulations,
where escape is possible only if you turn a blind eye to past
and present realities.


Another snip from the book, describing the origins of the Ala Wai Canal, which separates Waikiki from the rest of us:

In this chapter, we review the history of the Ala Wai, which
was created by Walter F. Dillingham’s Hawaiian Dredging
Company in 1921–1928 and was aptly first known as the
Waikîkî Drainage Canal.1 Whereas Lè‘ahi [Diamond Head]is the most recognized
landmark associated with Waikîkî, the Ala Wai is the
mark on the land—indeed the scar on the ‘âina—responsible
for creating the Waikîkî we know today. The canal ostensibly
was created to clean up Waikîkî’s so-called swamps, which
harbored mosquitoes feared as carriers of disease. However,
the engineering project was really undertaken as a reclamation
endeavor, to create land suitable for development into commercial
and residential real estate. Although the enterprise
was a gigantic business deal orchestrated largely by two men,
Dillingham and Lucius E. Pinkham, the groundwork for reclamation
was laid by Sanford B. Dole’s republic, which stole
Hawai‘i’s government from the Hawaiian monarchy in 1893.