The revolution IS being televised

Here are a couple of tweets that came in a short while ago: 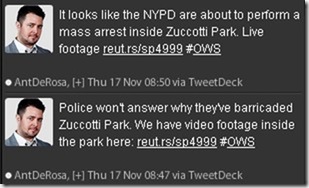 “It looks like the NYPD are about to perform a mass arrest inside Zuccotti Park. Live footage…”

So the Revolution is indeed being televised.

Across the country, police are acting, often with more or less brutality, to arrest demonstrators and destroy their encampments. I suspect that televising these raids will bring in new recruits, something like the US recruitment effort in Afghanistan. I mean, we kill people with drones, stirring up waves of anger that lead to new Taliban recruits.

I was at the APEC protest on Sunday at Ko Olina and kept having the phrase, " The Revolution will not be televised" run through my head. I asked Henry Curtis and Kat Brady where that came from but none of us could remember.....so here it is on your site! I guess maybe we are all mysteriously linked a growing revolutionary consciousness. How cool is that?


Henry and Kat were too young maybe (?).

"The Revolution Will Not Be Televised" is a poem and a single from the 1970's. Wikipedia has info. It was also the name of a documentary made in 2002.

The single went viral before there was an Internet. I remember hearing it played over and over on radio station WBAI in New York. There were a couple of songs that did that. Another was "Alice's Restaurant", for example.

Wikipedia is here.
Lyrics here.
Mention of the documentary here.

I'm sure you can find an mp3 file somewhere by Googling.