Rant: Aloha draining from Aloha State as our government takes from the homeless rather than gives

I think this is the one that did it to me. From today’s selection of Star-Advertiser breaking news::

I can’t explain it. Out in the real world, it’s police vs. 10,000 demonstrators in America’s real rebellion (that is, the one near Wall Street, not the one funded by the Koch brothers), but nothing is in today’s paper. 12,000 prisoners are on hunger strike but nothing in the paper. The mid-East is in turmoil. Stuff is happening. But don’t forget today’s hot breaking news, White Passes Silver As Most Popular Car Color.

Ok, I’m over it. I have even forgiven “Assyrian dictionary complete after 90 years” (6/5/11) because the story really was interesting.

Wake up editors, people are being hurt right here in Hawaii. It’s news, but not how you’re presenting it. The breaking news is that Aloha is draining away from the Aloha State.

But look, we’re just over a month away from APEC, and Honolulu’s one daily newspaper, which not only is supposed to reflect the public interest and concern but help to guide it, remains only superficially connected to some of Hawaii’s most pressing issues.

Maybe I shouldn’t expect too much. After all, our state and city governments also seem to be strangely unable to deal with our major issues—“Unencumbered by the thought process” as I think either Click or Clack occasionally quips. Yesterday’s news was that the City Council, with one refreshing exception, voted to take away the possessions of homeless people. But where’s the reaction? Hopefully, some outrage?

The approach of APEC has once again brought Honolulu’s struggle to hide its homeless problem into focus. The last time homeless issues got this big a spread in the paper, former governor Lingle had declared an emergency and constructed some badly needed shelters. What was the emergency? It was that neither state nor Honolulu city government was doing what was necessary to alleviate the suffering of its citizens. She stepped in and built shelters, which are not the complete solution, but it was a giant step. A giant step over the puddle of stagnant water that Honolulu city planning had become.

Folks, there are people’s possessions on the streets because of a massive failure to provide them with more reasonable alternatives. It’s a no-brainer to just take their stuff away. Fortunately, the City Council qualifies for the task.

Let’s check out yesterday’s front page news before going on: 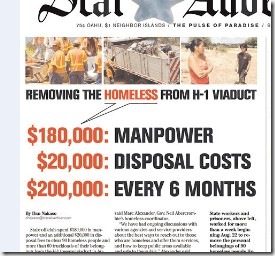 So what are we looking at here? $200,000 spent every six months to take away people’s possessions?

How does that help them exactly?

Now the rest of the world knows how backwards we are here in Hawaii.  What will happen to all that clothing, including children’s clothing, their schoolbooks, their lunch boxes?

I’m sorry, dear Star-Advertiser, but you have revealed an unfortunate truth. Now, I’d like you to look a little deeper into this.

I have found no evidence, in my extensive Googling, that taking away the possessions of people who have lost their homes and jobs does them the least bit of good. It neither provides housing, food or job training, for example. It cannot be classified as a “social service.”  In fact, it is inhumane.

(Side note: using prisoners to do the clearing work is something like slave labor, another thing that pushed Hawaii into the news recently.)

Why is it that we in Hawaii think we can solve a problem by not feeding people and by taking away their possessions and kicking them around?

Well, the upside of this is that we might improve our standing in the Meanest Cities ranking next time around.

Let’s check out some details of Governor Abercrombie’s war on homelessness.

1. It has characterized those without homes as misfits, mostly suffering from mental problems. This is destructive to the process of finding employment and moving people into houses.

The economy is arguably weakening, with the result that more people will lose their homes, even if they have one of the low-paying part-time jobs so common here. It also perpetuates the myth that there are jobs out there waiting to be taken. No, Neil, people cannot simply move from the parks, beaches or sidewalks into office suites. So give them a break. In fact, some do have jobs but they and their kids are still on the beaches, but not by choice. And not because of mental illness!

2. Abercrombie’s New Day means no food. This just doesn’t compute. It runs counter to the basic principles of most religions.

3. According to yesterday’s newspaper, Abercrombie is willing to spend $800,000 a year of state money to take away people’s possessions, creating suffering and instability, moving people farther from access to services, instead of spending that money to assist them. This is the “New Day” the citizens of Hawaii needing our help but who are instead being trampled under the uncaring heels of our state government. I’ll say again that that among those possessions will be children’s toys, their school books, and so forth. Take their tents, you’ve taken the “roof” over their heads.

Anecdotal reports are that people have been turned away from clubhouses, often the primary point of contact for those who need assistance. They were turned away verbally, which is why the information is “anecdotal.” There is no paper trail. “Sorry, you have the wrong kind of insurance, we can’t help you” or whatever.

There’s no doubt in my mind that instead of increasing services to the homeless, the state cuts have actually cost lives. In fact, there is sworn testimony given to the legislature that demonstrate an increase in deaths due to cuts in mental health services.

Yes, the agencies that serve the community, such as the Waikiki Health Center, continue to work as hard as they can, but think of how that $400,000 a year would help them to do it.

5. The City Council is about to pass a measure to take away more possessions from city streets. Again, how does that help someone?

6. The city is washing its hands of public housing. Privatization means greed steps in. It means the city is once again stepping aside from its responsibilities. The state is no better. How many years did it take to fix hot water? Elevators (a reporter found spare parts when our government was too lazy to do so).? Does it make sense to cut security and impose a curfew when crime predictably increases?

7. Hawaii’s idea of “affordable housing” is a long-running joke. Virtually nothing is being done to create cheap housing in the amounts needed to support an effective, evidence-based Housing First program. To succeed takes a commitment, but no commitment is in sight. It’s too easy to clear away possessions as a “solution.” Beyond that, the state is doing little. Some units are being refurbished, but compare the number with the need.

8. Hawaii does not have an effective system of rent control or stabilization. We’ll get back to that in depth in a future article. It works in New York and other cities around the country, even as greedy landlords seek to undermine it. In Hawaii greedy landlords are firmly established, and without a system of rent control, there won’t be enough affordable housing. Period.

The Star-Advertiser has done us a service by revealing the extent that the state is willing to work against the interests of its homeless citizens. Now please bring us stories about how other cities and states have worked to solve this almost universal problem. Let’s have editorials that correctly characterize state efforts to create affordable housing. Let’s see some analysis of the effects of budget cuts.

If newspapers can help form and inform the public interest, then please get busy on what’s important.

Seattle has tent city. It's a fascinating and inspiring community.