Your local newspaper really, really doesn’t want to bring you any more news on the Occupy protests than they can get away with.

Of course, as a discerning Internet surfer, you are completely up to date anyway, nevermind what the newspaper wants you to know.

Check this out—a map of known Occupy actions around the world. Aside from a couple of places, they are proliferating. So far, not much action in Africa nor in Siberia. At least, the latter is understandable. Look at the map of the USA. No wonder the commercial press and the financial establishment are trying to cover this up. It’s huge. It’s not under their control, and it happens even if they don’t report on it. 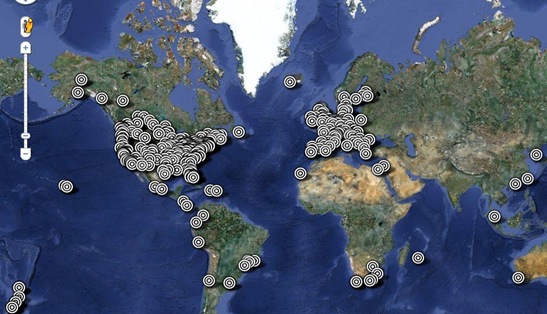 Depends whose map you look at. I read some tweets about Oakland PD tear gassing the Occupy Oakland protesters. Hmmm...on twitter, nothing with the hashtag "#Occupy..." was trending, although "Oakland PD" and "OPD" were. Trendsmap.com shows "#OccupyOakland" trending worldwide... Except North and South America. Trend censoring. WFT? It looks like trend censoring to me. Check it: http://bit.ly/ryFNop


Thanks for mentioning this.

I have seen the accusations of trend censorship tweeted, but don't know how one could independently assess that.

Thanks also for the link, which is to a trendmap.


Such a great article it was which the map signifies occupies action around the world. Awesome tools which you can monitor it easily. Thanks a lot for sharing this article.