US Congress to collectively punish Palestinians 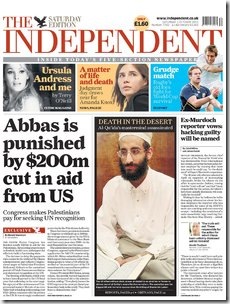 Another story from the London Telegraph: Palestinians accuse US of 'collective punishment' after $200bn in aid is cut off (10/1/2011).

After the release of the Palestine Papers it became obvious that neither Israel or the United States were bargaining in good faith towards a two-state solution. So this move against Abbas, who took another tack by taking his case to the UN, is retaliation for trying to bring attention to the ongoing and perpetual stalemate in the peace talks. Bottom line, though—economic sanctions will not hurt Abbas as much as the will hurt the Palestinian people.

Having headlines like this pop up internationally won’t help the US’ image, either, but then, what do we care these days.