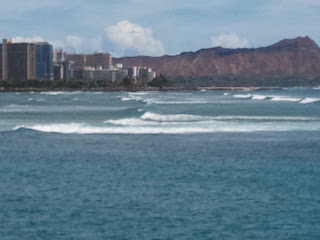 Several forums, gatherings and educational meetings are being organized by those opposed to the APEC vision of the future.

These protests may be reminiscent of the peaceful protests and marches that occurred in Honolulu in 2001 when the Asia Development Bank (ADB) meetings were held in Honolulu.

The first of the three sets of APEC meetings to be held in Honolulu this fall will occur at the East West Center from October 17-20, 2011.

The meetings of the APEC Industrial Science and Technology Working Group (ISTWG)  may serve as a trial run of how the police and federal law enforcement interact with peaceful protests in the Aloha spirit.

The APEC Climate Symposium (APCS) 2011: Harnessing and Using Climate Information for Decision-Making inAgriculture, Water Resource Management and Energy Efficiency and the anti-globalization protests may resemble the U.S.-initiated Major Economies Meeting (MEM) held at the East-West Center at the University of Hawai‘i at Mānoa from January 30-31, 2008.

Simultaneous with  the MEM meetings a climate teach-in was held across the street at the William S. Richardson School of Law, sponsored by the Environmental Law Program.

Peaceful protesters gathered first in front of the John F. Kennedy Theatre across a campus road from  the East West Center. Later, in pouring rain, the protestors went to greet delegates attending a reception at Washington Place.

Washington Place is the former Governor’s residence located across the street from the Hawai`i State Capitol. 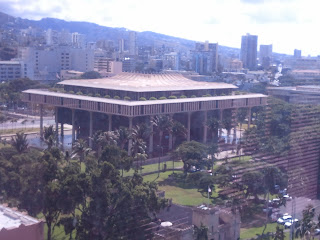 This year the East West Center again hosts an international climate summit and again their will be a public talk on climate change held nearby on campus.

The conference starts on October 17, also that day, from 7-8 p.m., the International Pacific Research Center (IPRC) will hold a Public Lecture on Climate Science at the Manoa Campus, Art Building Auditorium. Those interested in the event can contact Kevin Hamilton at 808-956-8327 or kph@hawaii.edu.

The keynote speaker will be Dr. Rosina Bierbaum, Dean of the School of Natural Resources and Environment at the University of Michigan. Her talk is entitled "Climate Change and Development: Avoiding the Unmanageable and Managing the Unavoidable."

“We must begin to adapt to climate change because it’s well underway ...The most vulnerable [people] in the world with the least resources to cope with climate change will be the most affected. But so will the poor in many of the developed countries in the world.” 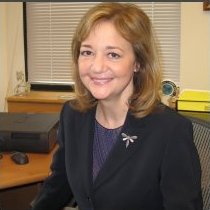 In April 2009, President Obama named her to the President's Council of Advisors on Science and Technology. In April 2008, Bierbaum was selected by the World Bank to co-author and co-direct the World Development Report 2010:  Development and Climate Change.  In 1999 she was awarded the Environmental Protection Agency’s “Climate Protection Award”.

Bierbaum currently serves as the Vice Chair of the United Nations Scientific Expert Group on Climate Change; as a trustee of the University Corporation for Atmospheric Research (UCAR); and as a board member for the American Association for the Advancement of Science, the Federation of American Scientists, The Energy Foundation and the Environmental and Energy Study Institute.

Among those attending the APEC Climate Symposium will be University of Hawai`i professors  Bin Wang and Thomas Giambelluca.

Dr. Bin Wang is Chair of the Department of Meteorology,  International Pacific Research Center, School of Ocean and Earth Science and Technology. He has a B.S. in Physical Oceanography and an M.S. in Meteorology from Universities in China and a Ph.D. in Geophysical Fluid Dynamics from Florida State University. 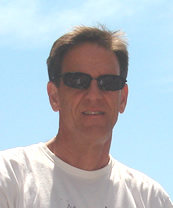 Dr. Giambelluca noted that most rain arriving on Kauai is created by moisture carried by the Trade Winds. Dr. Giambelluca indicated that the macro changes in global climate will raise the temperature of the Pacific Ocean in the area of Hawaii, but that temperatures over land will rise faster than over the ocean, thus reducing relative humidity and probable rainfall.

Dr.Giambelluca spoke at a 2011 University of Hawai`i roundtable on current trends affecting fresh water in Hawai‘i and practical approaches to adapt to a changing climate. The roundtable was sponsored by the Kamakaküokalani Center for Hawaiian Studies, Ka Huli Ao Center for Excellence in Native Hawaiian Law, and the University of Hawai‘i Sea Grant College Program’s Center for Island Climate Adaptation and Policy.

“Looking at daytimetemperatures, in all seasons and annual we see downward trends. So in other words, the data say it’s cooling during the day. But it’s warming at night, at a rate that’s about twice as fast as the daytime cooling. My guess is that the warming is just part of what’s happening here in Hawaii as a result of global warming.”

Truthout (2009): ClimateChange in Hawaii: Caught Between a Rock and a Big Wave

“Dr. Thomas Giambelluca, a climatologist and ecohydrologist with the UH Geography Department, said that while the overall global surface temperatures have been warming since at least 1860, Hawaii is in an area of slower warming, about half the global rate.

As overall global rainfall has increased during the last century, Hawaii's recorded precipitation has experienced a 5 percent to 20 percent decrease between 1901-2005. According to Giambelluca, this downward trend isn't limited to Hawaii, but can be seen across the same band of latitude (19 degrees N - 28 degrees N) around the world.

Giambelluca pointed to a decrease in precipitation during Hawaii's winter months (November to April) over the last century, with a more dramatic decline (27 percent) since 1970. Research also shows that Hawaii's summer rainfall is increasing slightly, with trends pointing to a drier archipelago with a potentially shrinking cloud zone around Hawaii's high volcanic peaks in the zone where rising moist tropical air creates the rain that makes the islands lush and green.

Giambelluca said Hawaii could start to experience more frequent droughts punctuated by periodic extreme heavy downpours. "It is possible we will have less rainfall, but still have more big rain events," Giambelluca said.

Between February 2006 and April 2006, parts of Hawaii had six weeks of nearly continuous heavy rainfall during which time the Kaloko Dam on Kauai was breached, sending hundreds of millions of gallons of water racing toward the sea, killing seven residents who were swept out of their own homes.

Last month, an extreme rain event on Kauai flooded the Hanalei Valley, home to the bulk of Hawaii's taro crop and a wildlife refuge for rare and endangered Hawaiian birds. Biologists on Kauai have since reported an increase in bird deaths as they move from flooded areas into the flow of automobile traffic.”