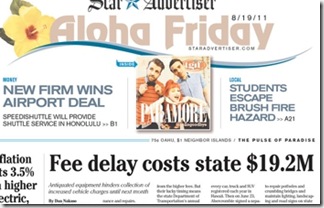 Maybe it’s a good thing that the Star-Advertiser took itself off the Internet. This way, APEC 2011 will not find this sad news in their Google News or when they search for info on whether Hawaii is a great place to do business or not:

A delay in implementing increases in registration fees and vehicle weight taxes means $19.2 million will not be collected this year for highway maintenance and repairs.

The new fees were supposed to go into effect July 1 on every island
…
"We have a 1968 or 1969 system," Kamimura [Honolulu's licensing administrator] said. "There are multiple programs that need to be changed just for a fee increase. We need to make sure all vehicle renewals are in fact correct. We don't want glitches where some guys are charged the old rate and some guys are charged the new rate."

So let’s see… there were no personal computers in 1968, we’re talking some kind of real dinosaur probably. A living fossil, in computer terms. Have they got an IBM 7040? A 360 maybe? Some small mini-computer? Or did they take a 1968 computer program and stick it on a more modern machine? Either way, this is third-world technology.

So the state thinks it lost $19.2 million as a result of not updating its computer system for  43 years. Couldn’t some of that money, say, a few thousand, have been used to buy a couple of PCs and a database program, and a few thousand more go for programming?

It appears that the loss is ok with these managers, and that they are keeping their 1968 computer system.

The article mentions that the lack of money was anticipated:

Transportation officials "slowed down spending" as a result, Meisenzahl [spokesman for the state Department of Transportation] said, but have not postponed any repair or maintenance projects.

That may explain the funny paintjob on the mauka crosswalk at the Pali Hwy and Vineyard Blvd. intersection—where only 3/4 of the crosswalk has been repainted. Speaking of cheap.

Update: In fairness, I was unfair with this last comment. Of course, only part of an intersection can be painted, leaving the rest for cars to travel. Then the other half is painted when the first part is dry.  It took the city a while, but today (8/24) the intersection is entirely painted. My bad.

Or this snap, taken just 20 yards makai of that shameful intersection. Now, as a driver in that right lane, can you tell me if it is right-turn-only or straight and right turn? Of course not. The painted arrow has totally disappeared and there is no sign visible to the driver. 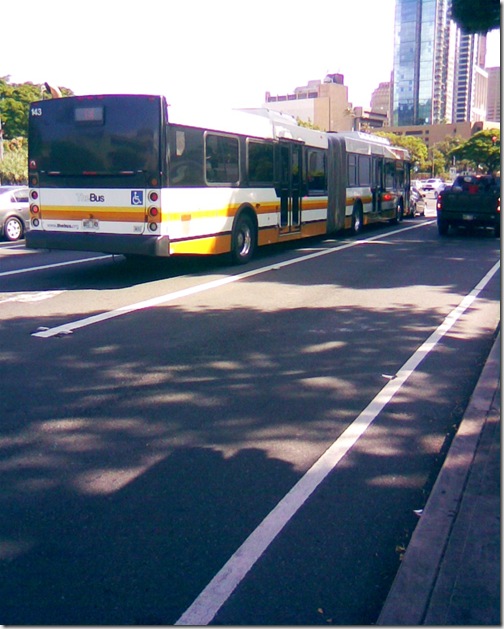