“Honolulu has the worst road maintenance in the…”

We got interrupted at a crucial moment in that sentence. I was noticing a great job of re-lining a recently repaired parking lot when I saw the contractor’s truck nearby. A crew was piling some giant-sized clean-looking containers of white paint onto the asphalt, and there were some new-looking machines nearby.

The paint job was superb—clean, crisp white lines, all the same width and length.  As a connoisseur of this art form, I was impressed.

There were no ugly rollers in sight.  I guess the machines draw the lines somehow.

The workers were all cleanly dressed, like professionals. There wasn’t a paint spatter on them.

So I approached the crew and asked about it, in particular, how come their work looked so professional and the lines that the City puts down on the streets were so crooked. Also, how come the street markings don’t last?

I ventured that when we lived in Japan, the crosswalks and street markings were always in perfect condition. The Japanese even used some kind of crystal in the paint that reflected a car’s headlights back at the driver.  They said that the city uses some kind of crystal also, but it doesn’t seem to last.

We got interrupted before I could find out whether they felt that Honolulu’s road maintenance was the worst in the state, the country, or maybe the world.

These two pictures are courtesy of DJ Gnosis (djgnosis.com) and used with permission. His pictures of Tokyo around 2002 made me homesick.

The pictures are of intersections in Shibuya, one of the busiest spots in Tokyo for both cars and pedestrians. In just a second, when the light changes, there will be a stampede. The second picture shows the crowds making their way across.  Notice how neat and clean the crosswalk is. 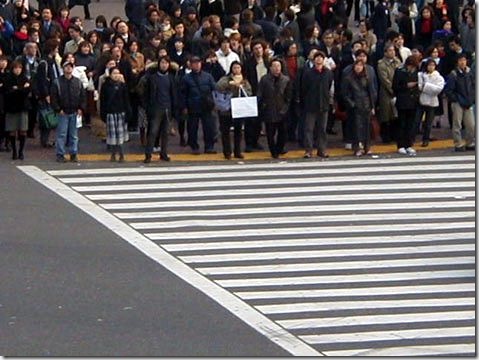 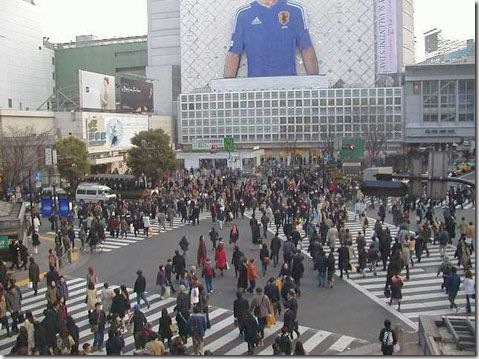 Look at all those people! And of course when the light changes, the pavement is pounded by zillions of cars.

Here’s a sloppy paint job just two blocks from town in Honolulu. Notice also in the foreground that the old paint continues to disintegrate. 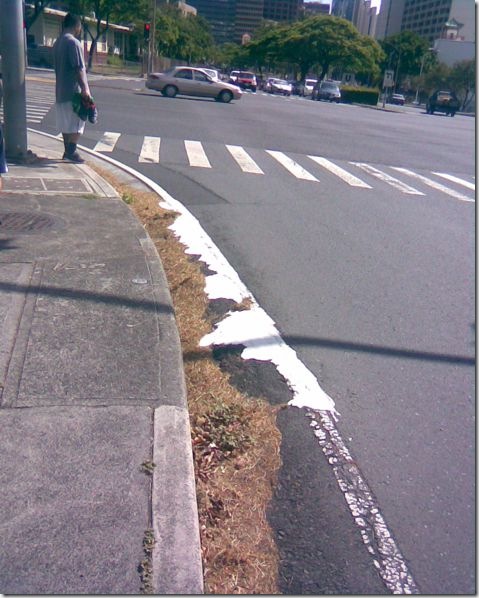 Check the right lane in this picture. Can you go straight, or is it right turn only? The pavement markings are entirely worn off. This is the Pali Highway near town. 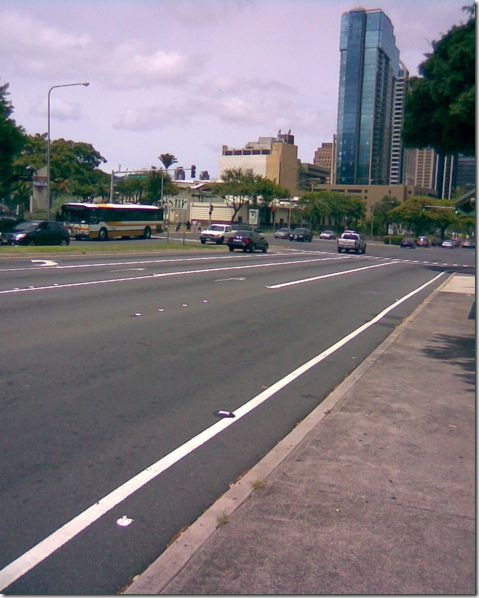 For our final pic, here’s a disappearing crosswalk on Vineyard Boulevard. It could be anywhere, of course. They look ok when put down, but almost immediately begin to disappear. Contrast this shameful example with the Shibuya pictures above. 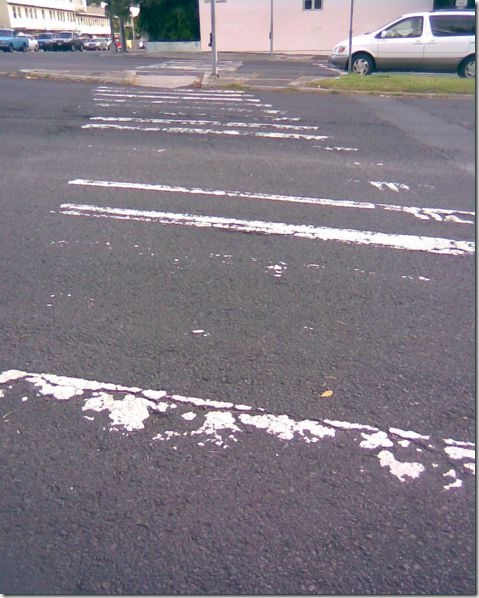 Although I have no pictures, if you get off the H-1 at 6th Avenue and turn towards Harding, at the corner there turn arrow paint is totally gone. There seems to be no post sign saying whether that lane is turn only or not. Perhaps I missed one.  I guess, if you don’t know, you shouldn’t be driving there.

And then going on towards Kahala Mall, do you know the point where the H-1 flys overhead? Before the Zippys. There is a complicated paint job to direct traffic coming from points East that may want to make a left turn right before the H-1 West entrance. The yellow paint is gone. The intersection is usually ok because drivers know how it used to be, but occasionally it is chaos. That intersection doesn’t work without paint, and the paint is gone or almost gone. In the shadows the remaining smudges can’t be seen anyway.

All this is typical Honolulu, where between potholes and paint, we may well have the "worst road maintenance in the…”

I’m sure that Waikiki will be freshly painted before APEC 2011, but should the APEC delegates venture out to Chinatown, Foster Garden, or any nearby tourist spot, they’re going to see the “real Honolulu.”

We can do better, and we should get our act together, APEC or no APEC.