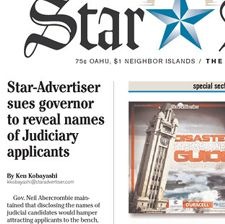 The Star-Advertiser is chasing after the list of names from which Governor Abercrombie chose Sabrina McKenna to serve on the Hawaii Supreme Court, according to today’s front-page story in the print edition:

The newspaper is seeking the release of the names of the candidates the governor considered in appointing state judges.

Abercrombie has refused to disclose the names of four to six candidates on the list submitted to him by the state Judicial Selection Commission when he appointed Sabrina McKenna to the Hawaii Supreme Court this year.

His refusal, the Circuit Court lawsuit said, violates the state Uniform Information Practices Act, which mandates that government records be open to the public.

As the story relates, the Office of Information Practices, under acting director Cathy Takase, ruled that the Governor had to release the names. The story omits the gov’s ugly maneuver replacing Takase and stuffing a person into the position she would normally take on returning to staff. Ian Lind reported on the day of the replacement:

Today is her last day with OIP. Takase was given only one-day notice of her dismissal, according to a person familiar with the situation at OIP.
…
In another potentially controversial move, the administration has reached down into the OIP staff to directly appoint a staff attorney. Linden Joesting, who had previously served in a similar position, was appointed this week. The move is unusual because such staff appointments are typically made by the OIP director.

HRS §92F-41  clearly states that the OIP director may appoint staff, but I don’t know if it can be interpreted to mean that the governor cannot. In any case, the action effectively kicked Takase out of OIP altogether.

Abercrombie’s new appointee refused to issue an opinion on the judicial appointment list. From the newspaper article:

The newspaper asked OIP to help in getting the names, but Cheryl Kakazu Park, who was appointed by the governor to replace Takase, replied in a letter to the newspaper and the online news organization Civil Beat on May 13 that the office would not be issuing an advisory opinion.

Park wrote that because the governor's position was that he would not release the names until directed by the state court, another OIP advisory opinion would be "futile."

OIP does not appear to have the ability to shirk its responsibilities, as determined by the Legislature. Again, Ian Lind:

The director of the office of information practices:

(1) Shall, upon request, review and rule on an agency denial of access to information or records, or an agency’s granting of access;

I added the bold type on the word “shall.” OIP shall rule on an agency’s denial of access. It doesn’t use the word “may,” which would have given OIP discretion on whether to issue a ruling. It doesn’t say that OIP shall rule except when it looks futile because an agency stubbornly insists that it has the right to do whatever it wants. It says, simply, OIP shall do this job. It’s #1 responsibility. Top of the list, top line priority. 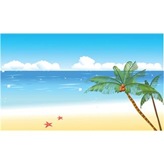 OIP appears to have put itself on indefinite vacation in Hawaii at least with regard to issuing opinions. See their press release The Raw Truth (7/19/2011) (scroll down until the large section with that heading).

The OIP’s reasoning is too lengthy to summarize fairly, but part of it expresses concern over setting up a situation in which one government agency sues another, at a time of “severe cutbacks in government funding.” While OIP’s concern for the state budget is no doubt admirable, it is just not their responsibility to avoid issuing possibly controversial opinions for the sake of the budget.

Disappeared News submitted a complaint to OIP on July 20, 2011 challenging the Hawaii Reapportionment Commission’s apparent violation of the sunshine law. The major issue was that Chair Victoria Marks placed a discussion of non-resident representation on an agenda without public notice, and not only discussed it, but put it to a vote.

OIP wrote to Judge Marks on July 21, and I was encouraged by their rapid attention to the complaint.

I have not yet received an opinion. In an email dated August 4, OIP confirmed that Judge Marks had responded to them. That was 20 days ago. The ball appears to be in OIP’s court.

Meanwhile, the Commission moves forward with its schedule of public hearings. No, I cannot take the Commission to court, but some group might do that, setting back the time-critical process should a court agree.

Should the Star-Advertiser win their quest for the judicial selection list in court, that would be a welcome step one. A step two for someone to undertake, which is unlikely, would be to challenge a state agency’s ability to surrender its primary function unilaterally. As to the replacement of acting director Takase, that’s probably not going to be resolved. Sometimes justice is elusive.

As I said yesterday, although the S-A's attorney says that the governor must prove that releasing the names would cause attorney's not to apply she admits that that would constitute the frustration of a legitimate government function. But the real case should be whether the release of the names actually does fulfill the frustration clause.

I actually agree after talking to attorneys that they have to factor the release of their names into a decision as to whether to seek a judgeship ad it may cause them to say no. But it is just one of many factor that are a part of the process. It doesn't necessarily frustrate anything any more than a dozen other factors in making the decision to apply for a judicial appointment.


In reading the complaint, I was wondering how a judge would view it. I see a difference in style comparing this case and the one sample I had of attorney Jeff Portnoy's actions. He's pretty direct.

I don't believe (of course, I'm not an attorney) that a choice to apply for a position or not to is a government action. It's a private action. If it is frustrated, it's still not a government function. I'm not sure I'm explaining well. The government function might be the ability to actually make an appointment, given a list, and that seems in no way impaired.

There are all kinds of conditions set by government (like legislators having to live in a district, for example). For judicial appointments, a condition is that one's name is likely to be disclosed. If it is the law (and the judge will decide that), it's just the way it is.