Honolulu—A city without a daily newspaper?

As the sky lightened this morning and I got ready to head for the gym, I noticed that it’s time to take that growing pile of daily newspapers off to the recycling bin.

Yes, Virginia (and Maine, and Texas and APEC countries), we do actually have a daily newspaper, though you’d never know it.

This is a Google search for APEC news that shows only insignificant breaking news. Neither item is current.

It doesn’t matter what the paper’s veteran reporters or editors write, it’s all invisible to the world, including to the countries we hope to impress in November when APEC comes here.

As I toss my papers into the bin, I’m also burying Honolulu’s history for good.

When the Star-Advertiser, successor to the Honolulu Advertiser and the Star-Bulletin, took itself off of the Internet, it cut Honolulu off from the world.

The most comprehensive alternative is Civil Beat, but they are smaller (though growing) and not a daily paper. Having a good paper is still a basic requirement of an advanced civilization. Maybe one day that will change, but not yet. More important, we live in a mobile age. People expect to get news on their smartphones, most often from the local newspaper in the area they’re checking. APEC delegates and their staff are no different.They can learn more about other islands in the Pacific (Maui, Yap, etc.) than about Honolulu. 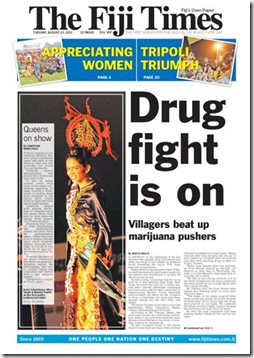 rrent only as of May 2011). Fiji has a print newspaper that’s also on-line (“The first newspaper published in the world each day”).

It’s 2011, Honolulu, and where is your daily newspaper? Most people in the world won’t know you have one.

When the recycle bins get collected, Honolulu’s history (and much of Hawaii’s) gets carted away to the landfill. Or maybe they burn it. I’d Google to learn which, of course, which is my point.

While the Star-Advertiser is a private business and can do whatever they want, Hawaii’s state government should be concerned. Very concerned. You’d can’t have high-tech businesses, or many non-tech businesses either, if you don’t exist on the Internet. Honolulu has largely disappeared from view.

The only plus side is that APEC visitors will not be able to learn the truth, good or bad, about Hawaii. They will be dependent only on the propaganda stuffed in their conference packet. They won’t learn, for example, that our substitute teachers are owed $100 million but that our state legislature hasn’t agreed to pay them. That won’t be in their packet. They won’t learn if homeless people have been swept off Waikiki streets for their benefit or not. They also will be missing Nadine Kam’s restaurant reviews.

And won’t they be surprised the morning after their arrival, when they open their hotel room doors and find a newspaper outside? “Hey, Honolulu has a newspaper!!”

That’s only part snarky. Major cities in this country have on-line news, period. You connect with the city on your iPhone or iPad at their newspaper website.

If Honolulu has no paper of record other than what goes into the landfill, we have a problem that ought to be worked on, for the sake of our economy, if for nothing else.

The plus side of not being able to read SA on line, I am on the computer less. I do miss reading letters to the editor, but my inner peace level is higher now.


Black is making himself and the SA irrelevant.