Source of UK riots could be police profiling, stop and frisk abuses—just like what New Yorkers experience


“"There is a mass insurrection. And I’m not talking about rioting; I’m talking about an insurrection that comes from the depths of society, from the consciousness, collectively, of the young blacks and whites, but overwhelmingly black, as a result of the consistent stopping and searching young blacks without cause," says [journalist Darcus] Howe of the uprising. [blogger Richard] Seymour notes that anti-terror legislation has led to an unprecedented number of stops, predominantly of youth of color, but protests against the stops have been largely ignored by the British media. "A political establishment, a media, and a state system that gives people…the impression that they won’t be listened to, unless they force themselves onto your attention, is going to lead to riots," says Seymour.”

The pull-quote above is from the introduction of Democracy Now’s segment on the UK riots, Over 1,000 Arrested in U.K. as Anger over Inequality, Racism Boils Over into "Insurrection" (8/10/2011 includes video, transcript). It’s the best in-depth coverage I have seen so far, please click and check it out.

The “unprecedented number of stops” is not very different from what black youths face on the streets of New York City. The New York Police Department should pay attention to the news from London.

The NYPD’s stop-and-frisk practices raise serious concerns over racial profiling, illegal stops and privacy rights. The Department’s own reports on its stop-and-frisk activity confirm what many people in communities of color across the city have long known: The police are stopping hundreds of thousands of law abiding New Yorkers every year, and the vast majority are black and Latino.
…
In 2010, 601,055 New Yorkers were stopped by the police.
517,458 were totally innocent (86 percent)
317,642 were black (53 percent)
190,491 were Latino (32 percent)
55,083 were white (9 percent)

The numbers are even more stark, broken down by neighborhood. This graph is from the NYCLU website: 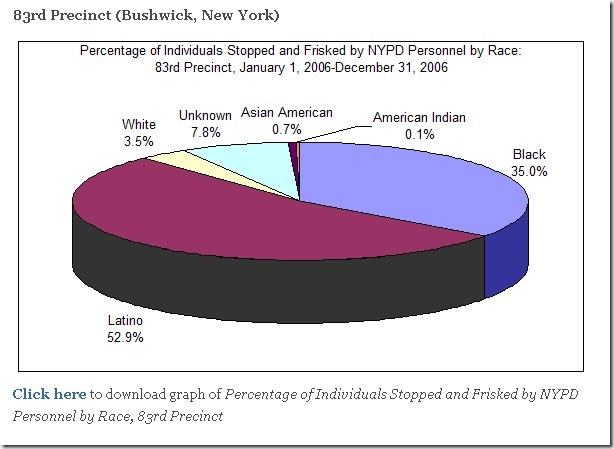 We in the USA would be foolish to think the UK riots are just something that happens in another country. It could happen here, given similar conditions. And perhaps we’re closer than we know.