Residents evacuated from around Fukushima nuclear plant will not be going home, and a plume of radioactive sea water heads straight for Hawaii

Although Fukushima has largely disappeared from the mainstream news, it isn’t over, folks.

Brad Parsons has been closely tracking this issue, and emailed links to the following web pages.

The first is a New York Times article documenting bad news for residents in the evacuated areas around the Japanese nuclear plant. The second is bad news for those in the path of contaminated sea water. A radioactive plume continues to move away from the Japanese coastline straight out into the Pacific Ocean.

Broad areas around the stricken Fukushima Daiichi nuclear plant could soon be declared uninhabitable, perhaps for decades, after a government survey found radioactive contamination that far exceeded safe levels, several major media outlets said Monday.
…
Lawmakers said over the weekend — and major newspapers reported Monday — that Prime Minister Naoto Kan was planning to visit Fukushima Prefecture, where the plant is, as early as Saturday to break the news directly to residents. The affected communities are all within 12 miles of the plant, an area that was evacuated immediately after the accident.

The government is expected to tell many of these residents that they will not be permitted to return to their homes for an indefinite period.

Next, Brad spotted this simulation of the radioactive plume of water moving away from Japan. If you go to the website, there’s a slider you can move to advance the calendar up to the present.

Japan is at the left, and we (Hawaii) are over on the right side. 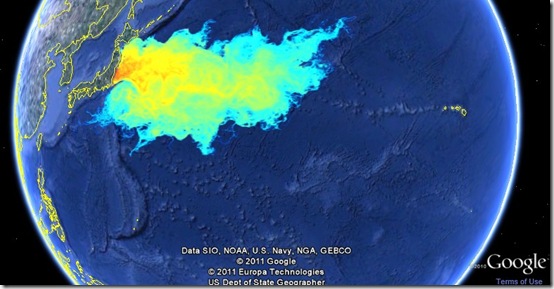 Plankton, algae, fish, whales, anything in the colored area is picking up radiation. There are notes about this on the website.

The slider only goes to the current date, it doesn’t attempt a prediction. Up to now, though, the radioactive plume has been moving straight out. It looks like Hawaii is directly in its path, though I don’t think that can be inferred.

I wonder if our state government is monitoring this, and what their contingency plans might be.

I just had a friend from Japan visit me a couple of weeks ago. He is a high ranking government official in a prefecture near Fukushima. He related to me that the whole radiation thing is being blown out of proportion. I thought his lack of knowledge of the situation was surprising.

There is a good website oceanmotion.org that talks about actual ocean currents and it seems to say the current goes North of Hawaii, down the W. Coast of the US and back closer to Hawaii on the West going leg.


The plume is supposed to be actual data. The slider advances dates up to the current day, but does not project into the future.

I agree with you about websites describing the current as going north of HI etc.

If it works that way, and it should, then as time goes on, this plume display should veer north.