It’s not that there’s no news about Hawaii, just that most of it is now reported from external sources. Like NPR, like Reuters.  Do we even have a daily paper in Honolulu? Who would know? The world gets its Hawaii news from the web. Do we even have daily papers here, or do we carve news on stone tablets left on the side of the road?

Here’s the first page of Google News for the search item Hawaii. Someone wanting to come here for vacation might do that search, as might someone trying to find, say, the Hawaii solar energy company that just got a new contract, but they can’t remember the name. And yes, APEC staff might do a Google search.

Click the image for larger, or do your own search. 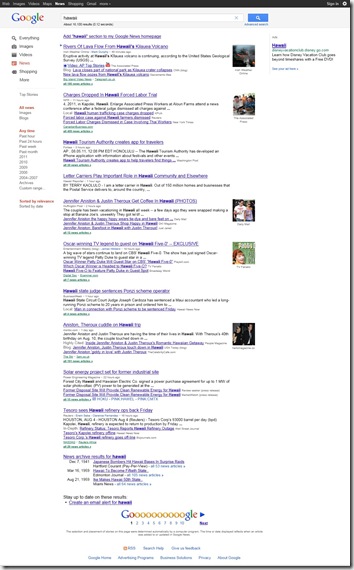 Here are the news sources, from top to bottom on this page:

Yes, the solar project is in there, and the hit should have been our own paper, not a power engineering magazine located who knows where.

For a search on a particular topic, such as “Aloun”, the results are the same. Yet today’s paper had extensive coverage starting on the front page. I feel sorry for the good work that reporter Ken Kobayashi has done on the story. He’s no longer read very much. The New York Times learned that lesson and tore down their paywall—their best writers, along with the paper’s influence and reputation, disappeared as far as most of the world was concerned.

Of course, the Star-Advertiser disappearing itself from the web is a decision they made themselves. It’s their business, not ours, and if they want to jump off an electronic cliff and commit web suicide that’s up to them.

It is not likely to enhance Hawaii’s image as a great place to do business, however.