Well, we told you so. Why wasn’t the commercial press at all skeptical of a plan so too good to be true? Why did governors of three states (Hawaii, Pennsylvania and South Carolina) hype their “foresight”  in cutting deals that were not believable at the time? Today the Associated Press reported that

The South Korean electric car and golf cart manufacturer has apparently abandoned its pledge to the three states — without notice — and deserted its new U.S. markets amid financial difficulties, The Associated Press has learned.

Lots of good things happen in Hawaii. Building electric cars at a rate of 10,000 a year is probably not one of them. I wish that I am wrong, of course, but wishes based on hype don’t work well. 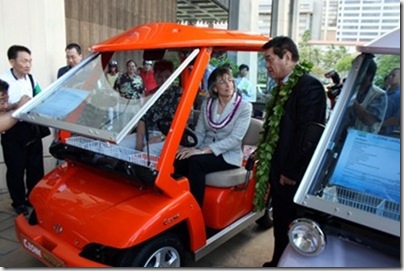 This picture is no longer on the Governor’s web site, but the Internet never forgets. Here’s former Governor Linda Lingle in a CT&T “golf cart.” True, the car the company proposed to build was a different model, but this was the best they could do apparently for the photo op. 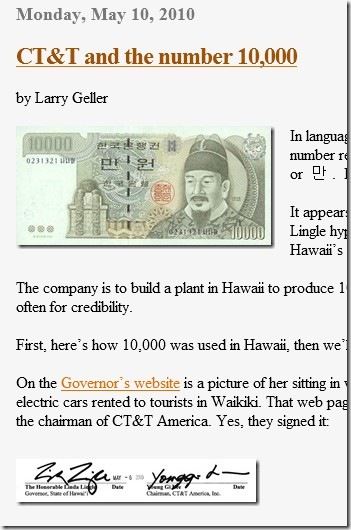 Here’s my earlier article. My suspicions arose because CT&T promised each state that they would build 10,000 cars a year. There are too many variables, and 10,000 in Korea, Japan and I think China is also a number having the sense of “lots” or “really a lot.” The little box on the bottom at left is Linda Lingle’s signature on a memorandum of understanding with the car company.

Check out that earlier article. It’s fun to read. There seems to have been an agreement to build 10,000 cars in Fiji also.

If you believed all of this would actually happen, I have a spaceport on the Big Island I could sell you.

Look, assembling electric cars in Hawaii might work. But not likely. Just sayin’.