While typing the previous article about the electric car company that probably won’t make 10,000 cars a year in Hawaii (or in S. Carolina, Philadelphia or Fiji (!)), I realized that Hawaii’s economic planning may be something akin to a “cargo cult.”

There are lots of definitions of the term if one googles. For example:

A characteristic feature of cargo cults is the belief that spiritual agents will at some future time give much valuable cargo and desirable manufactured products to the cult members.

So in this instance, we believed that the Koreans would employ all those people to make electric cars here. Believing that we would get 10,000 electric cars a year sounds very much like a cargo cult to me.

Another hot belief is that rich folks will fly into space from Hawaii.  Maybe they will, but maybe they won’t.

Motorola was supposed to bring prosperity as a key tenant of our late lamented “high-tech park” in Mililani. So was Verifone and a long list of other companies. Hoku Scientific was a business page darling, now foreign-owned. It created jobs in Idaho, anyway, not in Hawaii. HECO, which makes its money burning oil, is supposed to lead us into a “green” energy future.

If we worship robots (through robotics competitions in schools) it is supposed to bring new jobs to Hawaii. How, I’m not sure, but a belief need not be justified. You just find a star and make your wish, then sit back and wait, I suppose. Encouraging school kids to study science is of course a good thing, no argument there, but the effect on the economy has yet to be demonstrated.

I’m being cynical. But how else is one to react to the series of schemes that don’t work out?

Seriously, finding a new track for an island economy is a problem. Islands, wherever they are (Singapore doesn’t count), don’t do very well. Hawaii is lucky to have steady tourism so far, though our current DBEDT director thinks it is “stagnant.” Hey, it’s our cash cow, we have no other besides service to the military, which is also good (economically, for the state) and also steady. War isn’t going out of style, nor does the military plan to go soft and give their lands back to Native Hawaiians quite yet. They don’t see things that way. Like it or not, they contribute big time to our economy.

I don’t expect that the current DBEDT director (or his predecessor) would pay any attention to a  humble blogger, but he might check out a paper written in very simple language by James Mak, Professor of Economics at theUniversity of Hawaii in 2001:

Hawai‘i does not have the resources to produce steel, glass, paint, plastics, and other things used in the manufacture of cars. It would be too expensive to produce automobiles in Hawai‘i if we had to bring in all the required resources and then ship the cars out again to customers on the mainland and elsewhere. That is why we in Hawai‘i buy cars from Michigan, Japan, Germany, and other places more suited to car manufacturing.

People from Japan, Germany, and Michigan come to Hawai‘i to vacation because we have better beaches and climate, resources that are important in tropical vacations.

It is now easy to understand that the kinds of resources an economy has are important in determining what are most likely to be produced. In Hawai‘i our resources are best used to produce chocolate-covered macadamia nuts and tropical vacations.

Assembling cars to be used right here is a little different, of course. Keep in mind, though, that the quality of the assembly jobs would be quite low.CT&T wasn’t talking about design, engineering or skilled construction, just putting wheel A on hub B. All the high-tech stuff would have presumably been done in Korea.

Prof. Mak discussed GDP and then GDP per person:

In 1998, GDP per person was nearly $29,000 in Hawai‘i. This is calculated by dividing Hawai‘i’s $35 billion GDP in 1998 by the 1.2 million people living in Hawai‘i in that year. In other words, Hawai‘i’s economy produced an average of $29,000 worth of goods and services each year for every man, woman, and child living in Hawai‘i.

Economists use the information on GDP per person to compare how well people live in different countries. Since people would rather have more goods and services than less, people generally live better if an economy produces more goods and services per person than if it produced less.
…
In Tuvalu, nearly 3 out of 4 people of working age are in subsistence or fishing activities. In Fiji, 2 out of 5 people are engaged in subsistence activities. The subsistence lifestyle has virtually disappeared in highly developed Pacific island economies like Hawai‘i and Guam. Highly developed economies are defined as economies with high GDP per person.

So yeah, tourism is stagnant, but thank goodness we have it.

I’ve said enough. But I can’t resist this one last snip from Prof. Mak’s paper: 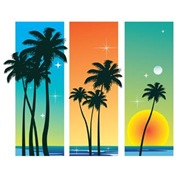 The next time you see people throwing away coconuts, you might want to take a few home. Leave them out to dry until just before Christmas. Then you can write addresses and holiday messages on the coconuts and mail them (unwrapped!) at the local post office to a friend on the mainland. In this way, you have turned trash into a valuable economic product: an exotic, combination holiday card and present to a mainland friend.

So yes, let’s make the best use of our resources.

Now, if only we could find a use for DBEDT.