What do Abelian groups, Max Weber, and non-Euclidian geometry have in common?

Sometimes I wonder. Today is such a day.

All that stuff, I used to know about it. It’s of no use to me now. I never used anything beyond my 12-times table after I left school, and even that, not so often. To be honest, I can’t tell you when I multiplied anything by 12 recently. As to non-Abelian groups, I use them just as much as I use Abelian groups. Which is to say, WTF is an Abelian group anyway? I no longer care. Whatever I learned on the Math Team in school has proved useless outside of the classroom.

I wonder why I studied neutral and non-neutral plasmas and Debye shielding (at Farmingdale, Long Island, graduate center of my college). I wonder what good partial differential equations ever did for me. Does anybody care now about the solution of the Schottky problem? I don’t.

The best thing about having studied non-ionic chemistry is that I no longer have to do that. Besides, it smelled pretty bad.

More recently, at UH, I had to read some of the works of Max Weber, the father of sociology. Good stuff, but again, so what. I question if I will ever use it. Or the rest of them. All dead, all unrelated to my daily life. Sure, he became famous. I doubt he studied Markov chains or quantum mechanics. See? One can do very well without.

What brought about this rather negative introspection? Probably a combination of income tax prep and this snip from the morning paper TV section: 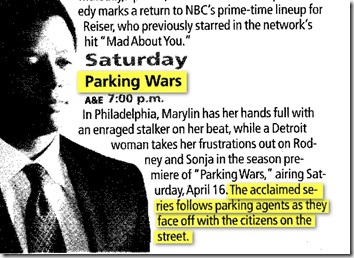 They didn’t teach this in Sociology at UH.

I guess this is the real world, though, and that’s what’s so depressing. It would be even more depressing to learn that there really are parking wars.

The morning paper also included an ad for a magnetic bracelet with testimonials about all the serious diseases it cures, thereby making no medical claims itself. The expensive ad wouldn’t appear if people didn’t buy the bracelets.

It also had an ad for nutritional supplements for young children who are doing fine, and so don’t need them. There was another supplement for children not doing well. Guess what—the one for the kids doing fine had more vitamins than the other.

I guess any parent buying that stuff for a healthy child is just more gullible by definition.

So why do I spend time at the legislature testifying about all these bills? Why aren’t the people sitting home at night watching reruns of Parking Wars down there testifying for themselves??

Hawaii schools probably don’t even mention Abelian groups. And why should they. Not much math is needed to hold the jobs that are available here. Too much study of Abelian groups, and next thing you know, the kid will be wanting to go to college on the Mainland, and will of course never come back to Hawaii.

I wish the newly appointed Board of Education good luck. They might get better test scores somehow, but unless they have magic to create jobs in Hawaii that demand a good education, I don’t think they’ll get much improvement. They probably have no idea what Abelian groups are, either. Maybe they heard about non-Euclidian geometry.

I’m going to see if I can find some of my old textbooks to donate to the library. They sell donated books for a buck. Reading Weber is probably better for somebody than watching Detroit women taking their frustrations out on hapless parking attendants.

Hmmm… that could be the subject of a sociology paper, if no one has done it yet…

That high School kids are still saying that geometry is a waste of time because they can't see what possible use they would ever have for it, strikes a familiar chord. This was exactly the same conversation some forty-five years ago when I was in the tenth grade. It's amazing that after four and a half decades, no one is bothering to teach kids how to relate. So children are still asking the same question, “Why do I need to learn this stuff?” However if teachers would tell them, “Circular motion is the foundation of time and space,” it might perk some interest because it’s all about shape, which Wikipedia defines as “the external two-dimensional outline, appearance or configuration of some thing — in contrast to the matter or content or substance of which it is composed.” Additionally, the interesting thing about this concept is that despite the connotation of physical structure we seem to be able to apply it also to the realm of intangibles, so these ideas about shape are taking shape. But the point here is that shape is the foundation and infrastructure of all existence and that the key to success and joy is in the forms and structures of the universe by which we shape our thoughts into action to achieve all objectives. Thoughts, for the most part are responses to stimuli emanating from the world around us, which is a hodgepodge of geometry. Hence, the shapes of this finite world influence, impact and inspire what we think, which, in turn governs all of our actions. Some questions have answers and some don’t, but the bottom line is that we need to look at each of the basic geometric figures as they exist in our language, culture and the world around us so that we may uncover some of the secrets of life to achieve joy and success. Therefore, seeing stimulates thought, thought causes speech, speech transforms to action and action leads to success. So, look, see and enjoy.


Thanks for your comment. I'm totally with you. You seem to have made creative use of your education.

I was assisted by teachers who brought these (and other) subjects to life in the classroom. Times have changed, but I'm sure similar teachers are still around. Our educational system, unfortunately, no longer values them, at least in K-12.

I also had access to New York City's 4th Avenue bookstore strip. For almost nothing, I could buy books that supplemented my education. Libraries now, aside from those in universities, cannot fill that role.

Now we have Parking Wars. Without belaboring it further, I am sad for the direction this country is taking, and I believe it is being consciously steered towards ignorance for the purposes of more efficient manipulation.