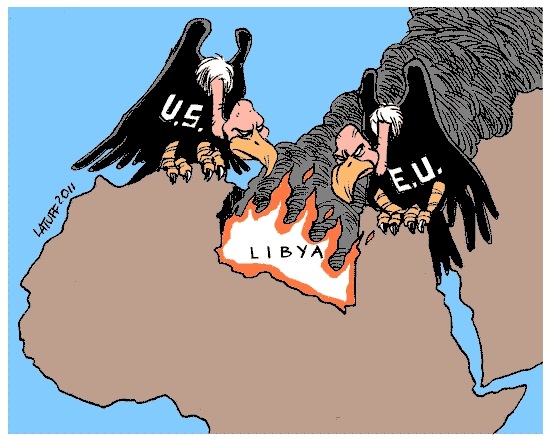 In the previous article, Prof. Johan Galtung related some troubling information on the current Libyan war—so I decided to follow up, and spoke with Alfred Ross, mentioned in Prof. Galtung’s article, and did a little research on the points mentioned by Galtung.

It appears likely that the people of Benghazi have been sacrificed for the military objectives of the foreign powers invading. If this analysis proves correct, then this war represents a grave humanitarian concern.

Indeed, there are plans for an “exercise” actually posted earlier this year on a French military website that could have described the NATO operation in Libya. The French-language version appears to be earlier, followed probably by the English translation. I’ll use links to the English version here. There are pages describing the planes and other assets to be used.

Now, what country is “Southland,” as described in the Conflict Summary:

Southland is a country with a specifically authoritarian government. The former dictator resigned handing over power to his son. Since that time, the country’s policy has become more aggressive; military operations have been launched against the French territory. Proofs of aggression clearly showed Southland’s responsibility in an attack against French strategic interests.

The French strategic interest could be simply the energy that Libya supplies to Europe.

The French President and the British Prime Minister decide to give an immediate and common response to this attack. The French Air Force Chief of Staff and his British counterpart ask the French Air Defence and Air Operations Commander and the British Air Command Deputy Commander in Chief Ops to plan and control this air raid, which is a very long distance conventional strike aimed at a strategic target in Southland.

The date of the operation is given as March 21 to 25, 2011. Actual bombing started on March 20. Close enough for government work. On that day, the US, France and Great Britain joined in a coordinated air attack. It was later reported that the CIA was on the ground.

From the Scenario page:

SOUTHLAND : Dictatorship responsible for an attack against France's national interests.

UNITED-KINGDOM : Allied country as determined in the bilateral agreement. The United Kingdom supports France through the deployment of its air assets.

This fits also, we have had the UN Security Council resolution.

Moreover, there are reports that the rebels are being supplied with arms via Egypt.Egypt falls under the US Central Command, under General James Mattis. Mattis infamously led the 2004 attack on Fallujah, Iraq, that resulted in approximately 6,000 civilian deaths and destruction of one-third of the city. It’s not likely that a general who supervised the kind of slaughter described in this article would care much about the citizens of Benchazi:

Burhan Fasa'a, an Iraqi journalist, said Americans grew easily frustrated with Iraqis who could not speak English. "Americans did not have interpreters with them, so they entered houses and killed people because they didn't speak English. They entered the house where I was with 26 people, and shot people because [the people] didn't obey [the soldiers'] orders, even just because the people couldn't understand a word of English." Abu Hammad, a resident of Fallujah, told the Inter Press Service that he saw people attempt to swim across the Euphrates to escape the siege. "The Americans shot them with rifles from the shore. Even if some of them were holding a white flag or white clothes over their head to show they are not fighters, they were all shot." Furthermore, "even the wound[ed] people were killed. The Americans made announcements for people to come to one mosque if they wanted to leave Fallujah, and even the people who went there carrying white flags were killed." Former residents of Fallujah recall other tragic methods of killing the wounded. "I watched them [U.S. Forces] roll over wounded people in the street with tanks This happened so many times."

Further background on the guy in charge of our participation in the Libyan war:

"Actually it's quite fun to fight them, you know. It's a hell of a hoot," Mattis said, prompting laughter from some military members in the audience. "It's fun to shoot some people. I'll be right up there with you. I like brawling.

"You go into Afghanistan, you got guys who slap women around for five years because they didn't wear a veil," Mattis said. "You know, guys like that ain't got no manhood left anyway. So it's a hell of a lot of fun to shoot them."

Matis was NATO's Supreme Allied Commander Transformation from November 9, 2007 to September 8, 2009 and was replaced by the the current commander.

The current Commander is General Stéphane Abrial, a French general, and presumably in charge of “Southern Mistral” or “Odyssey Dawn.” As his Wikipedia page notes, he is the first European to be appointed permanently as head of a NATO strategic command. He is based in Virginia.

Dennis Kucinich linked the two in his address to Congress on March 31:

NATO, which has now taken over enforcement of the no-fly zone, has morphed from an organization which pledged mutual support to defend North Atlantic states from aggression in military operations reaching from Libya to the Chinese border in Afghanistan. We need to now ask what role the French Air Force General Abrial and current Supreme Allied Commander of NATO for Transformation may have played in the development of Operation Southern Storm and in discussions with the U.S. in the expansion of the UN Mandate into a NATO operation. What has been the role of the US African Command and Central Command in discussions leading up to this conflict? What did we know and when did we know it?

As to the United Nations resolution, it appears that the US already has “boots on the ground” at least in the form of CIA operations, That, plus supplying the rebels and an objective of regime change, would seem to put the US in violation of the UN resolution, but there’s no contradiction with Southern Mistral.

Kucinich was concerned that all this proceeded without consulting Congress. He asked:

Were opposition forces in Libya informed by the US, the UK or France about the existence of Southern Mistral/Southern Storm, which may have encouraged them to actions leading to greater repression and a humanitarian crisis? In short was this war against Gaddafi’s Libya planned or a spontaneous response to the great suffering which Gaddafi was visiting upon his opposition? Congress has not even considered this possibility.

Perhaps Congress doesn’t care and prefers to leave oil wars to the President and to the generals. I don’t think Kucinich will get any sympathy on the House floor. Still, someone should investigate what’s happening in Libya and whether it was planned in advance.