Preparing for April Fools at the Hawaii Legislature

April Fools Day may come a day early at the Hawaii State Legislature, if the House Judiciary committee passes that un-ethics bill SB671 that has put our lawmakers in the national spotlight this year. This morning the Star-Advertiser ran its second editorial urging lawmakers to abandon their folly (the first was here).

For those who fail to see the humor in this bill: while many lawmakers in the rest of the country would love to come to Hawaii for a boondoggle or two, but either aren’t allowed to, or worry what the voters might think, our lawmakers think they can get corporate-paid trips to Vegas or Venice just by passing a crazy law. Of course, the first one who does accept such a trip will end up in a news spotlight so hot that no one else will attempt it.

Anyway, I brought my camera to the lege yesterday to see what funny things I could find.

None of these rose to a David Shapiro level of funny, though. So we’ll have to wait for the Thursday decision making on SB671 after all.

Despite the very slim pickings, here’s what I found. 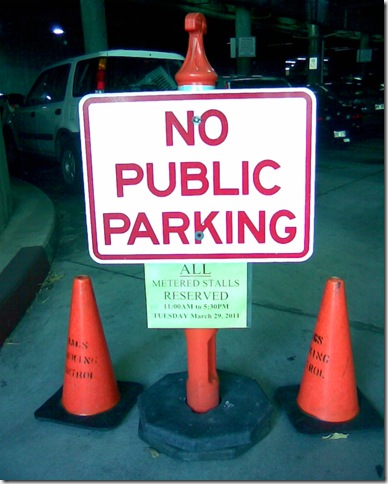 Yesterday was “Caregivers Day” at the Capitol, and AARP held a rally in the rotunda as well.

So there were at least two public events.

But on the way in to the Capitol for either event, or just to go park and give testimony, visitors encountered this sign.

Many of the attendees were senior citizens who no doubt were hoping for those parking spots. They better get used to it. No parking, next thing they take from your pensions. Tough love. Sorry, granny.

No public parking at a public event for senior citizens? Only in Hawaii, maybe.

Spaces quickly filled up across the street at the Department of Health metered lot. What to do?

I met some out-of-town visitors who came from Maui to testify at a hearing. One said that he could not find parking for his rental car and came into the meeting room well into the hearing, even though he planned to be there early. He was screwed by whatever perverse logic prohibited public parking on that day.

Usually, there are little baggies placed on meters to warn motorists not to park in reserved spaces. They look like this: 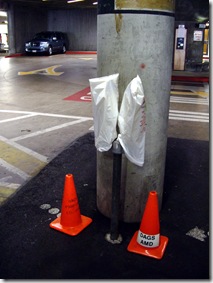 Yesterday, though, people were putting coins in the meters. I wonder if they got towed…

The baggies are bad enough. The bagging severely restricts available parking at the Capitol, making participation by ordinary citizens difficult or sometimes impossible.

Coming up from the basement level, I found this sign on an elevator: 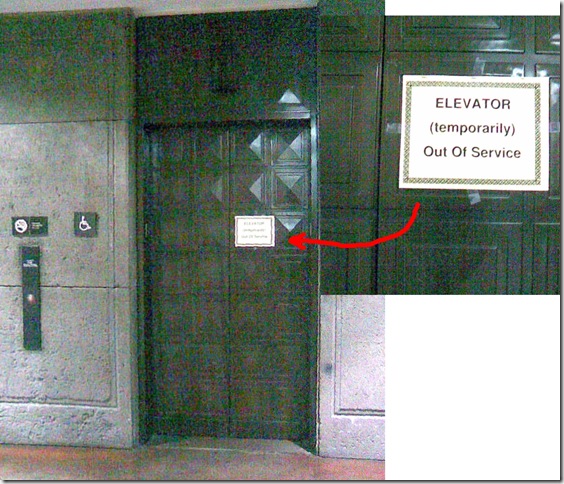 So the elevator is only (temporarily) out of service. As opposed to… maybe if the Governor can’t find any more pensions to tax, it would just stay that way?

Anyway, people were in a hurry, but the other elevator was packed and taking its own sweet time.

This next pic is old, not from this session, but if I don’t post it here, I’ll never post it. It documents the Official House of Representatives Rest Room. 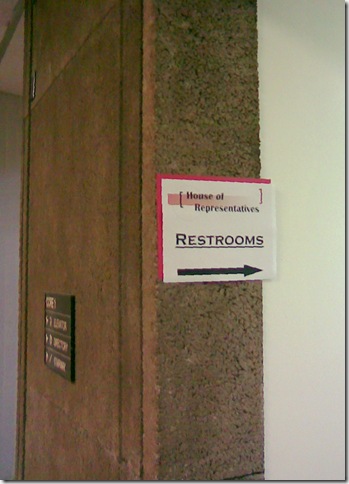 Curious about whether senators who might be in need could also use the restroom, I asked a nearby sheriff if they could. Perhaps jokingly, perhaps not, he replied, “Nope.”

As long as I’ve got the photos on the screen, might as well prepare for April Fools Day. 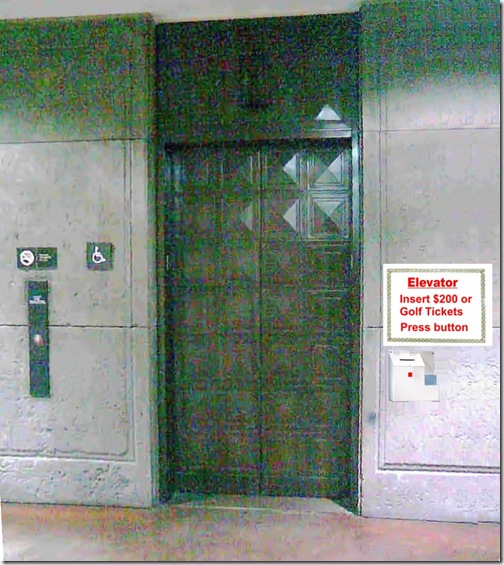 If not, call your legislator for an appointment.

Thanks for my chuckle for the day. Government is just to absurd most of the time. The appropriate attitude would have been to be certain that there were plenty of parking etc. for citizens to attend these important hearings.