Less than two hours notice for a hearing? Here’s why

The House Finance Committee is one hard-working committee. Last session, for example, they were up until after 4:30 a.m., huddled in sweaters and winter coats still holding session.

Of course, the public (except for certain bloggers) is not too likely to stay up to follow the action. That’s a perennial problem at our state legislature—processing all the bills while still providing access to the public. 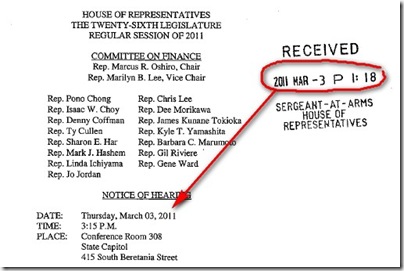 That was the issue last Thursday, when the Finance committee gave less than two hour’s notice for its 3:15 agenda. If anyone even knew about the hearing, how could they possibly prepare testimony and show up for the hearing?

Also problematic is that those pushing for a hearing are also the ones who get their testimony in, tilting the balance in favor of the bills heard.

Still, there could be good reason for scheduling the hearing  So I asked the Chair about this. Yesterday afternoon Rep. Marcus Oshiro emailed this detailed reply:

In response to your inquiry concerning the notice provided for the Finance Committee
hearing held on March 3, 2011 at 3:15 p.m., I agree that there was a very short time from
when the announcement was made at our noon floor session that day, the posting of the
notice and the start of the hearing.

This unfortunate situation arose because I received urgent last minute requests from the
public to not let these particular bills die (at least for this year) due to the First
Decking deadline.  I had not been planning on acting on them.  As you know, the sheer
volume of bills received by the Finance Committee and the limited time we have to hear
them lead to some difficult choices.

In this case, I was left with a choice of letting these bills die or responding to those
asking to keep them alive.  You will note that all of the bills on the hearing notice had
already gone through the public hearing process in the House where testimony could be
received from the public, and the bills had already passed Second Reading in the House.

I felt, under these circumstances, that it was in the public interest, since there were
requests to keep these bills alive, to let them continue through the process where
further public testimony could be received in the Senate.

Finally, I would like to note that our House Rules provide for the notice of meeting to
be shortened upon request on the House Floor, which was done in this case.

The following provides a synopsis of how the seven bills, heard on March 3, 2011 at 3:15
p.m., were passed out of their prior committees:

I hope this fully responds to your inquiry.

It does, and I appreciate the detail that Rep. Oshiro devoted to his reply.

Given the circumstances, it’s clear that Rep. Oshiro was acting in the public interest. The bills would have died if the hearing had not been held.

Still, and not to diminish his effort, it would be far better if it were not necessary to take emergency action that diminishes the public’s access to the legislative process and tilts the decision-making in favor of those pushing for a bill to be heard.

If you’ve spotted something you’d like to pass on to Disappeared News, please email to leak [at] disappearednews.com . We’ve been accepting leaks ‘way before Wikileaks ever existed. Keep ‘em coming.