Senate bill amendment would overturn gift law in place since 1967—and you can’t actually submit testimony against it! 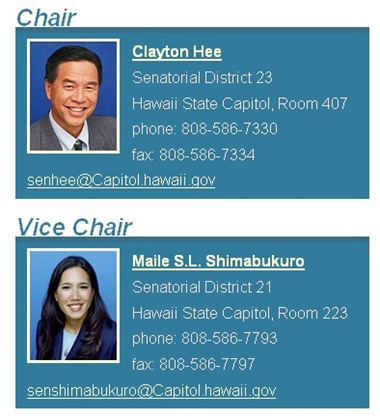 SB671 SD1 turns Hawaii’s Gift Law on its head by promoting solicitation of gifts by state legislators. But the way it has been posted on the Capitol computer, you can’t submit testimony on it, only on the original bill.

Even if you wanted to testify against SB671 SD1, you can’t, because of the way it is set up. If you submit testimony it would be registered under SB671, not the amended version. Now, SB671, as originally written, appears to be a very fine bill. So if you testified in opposition, you’d be opposing that bill. It’s the way the computer is set up. The committee did not provide a way to testify against the new, evil amendment (see: Watchdog barks: Senate Judicial Committee inviting corporations to hold bigger parties for them, 2/28/2011).

The amended version would allow someone to buy unlimited meals for state employees. Would Chinatown be cleaned up now if vendors could buy endless meals for rat inspectors? Want your permits approved quickly? Put the state employee, spouse and family up for a night at your hotel. That’s right–state legislators or workers could even be treated to travel, hotels, meals, including expenses for their accompanying spouse and kids. That’s going too far.

The amendment completely overturns legislation that has been in place since 1967. Here are some snips from that year’s Act 263:

A Bill for an Act Relating to Standards of Conduct for State Legislators
and Employees.

Be It Enacted by the Legislature of the State of Hawaii:

SECTION 2. Construction. This Act shall be liberally construed to
promote high standards of ethical conduct in state government.

SECTION 3. Applicability. This Act shall apply to every nominated,
appointed, or elected officer or employee of the State, including members
of boards, commissions, and committees, and persons under contract to the
State, and excluding justices, judges, and magistrates.
…

SECTION 5. Gifts. No legislator or employee shall solicit, accept, or
receive, directly or indirectly, any gift, whether in the form of money, service,
loan, travel, entertainment, hospitality, thing, or promise, or in any other
form, under circumstances in which it can reasonably be inferred that the
gift is intended to influence him in the performance of his official duties or
is intended as a reward for any official action on his part.

SECTION 6. Confidential information. No legislator or employee
shall disclose information which by law or practice is not available to the
public and which he acquires in the course of his official duties, or use
such information for his personal gain or for the benefit of anyone.

SECTION 7. Fair treatment. No legislator or employee shall use or
attempt to use his official position to secure or grant unwarranted privileges,
exemptions, advantages, contracts, or treatment, for himself or others.

SB671 SD1, the amended version, actually allows legislators to go out and solicit gifts up to $200 and meals pretty much without limit.

What to do? If you submit testimony, make it clear, in large letters, that you support the original bill and oppose the proposed amendment. Or if you’re really mad, show up at the hearing tomorrow, Tuesday, 3/1 at 9:00 a.m. in conference room 016, and testify in person.

So for the Legislators everyday will be Christmas.


I stole you line for my testimony at the Legislature this morning.