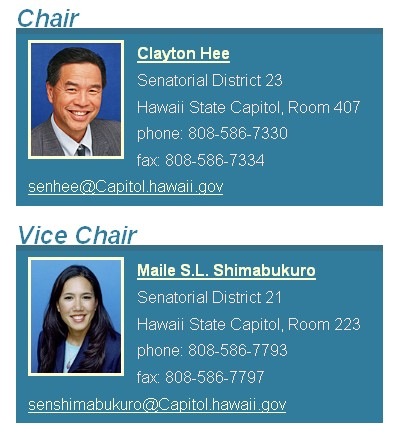 Would a Hawaii state senator sell out to a corporation or lobbyist for a few meals or gifts? Sure. And now, the Senate Judiciary Committee (Chair:  Clayton Hee, Vice-chair: Maile Shimabukuro) has proposed an amendment to a bill they will hear on Tuesday that will increase the limits on the loot that legislators can collect – or solicit – from special interests.

Yes, the Judiciary Committee’s proposed amendment to SB671, if adopted,  would allow legislators to, for example, to actually solicit gifts of money, hospitality, or any other thing, as long as the value stays under $200. If you don’t believe me, read the amendment.

So a bunch of travel industry execs could get together and throw $200 each into a hat at a party a lobbyist has thrown for an influential legislator, and it would completely legit. Or, worse, a legislator could literally solicit gifts from hotel operators, for example.

As we have seen, the state Ethics Commission is not policing lobbyist reports even now. See: Watchdog barks: Are lobbyists properly reporting when they throw parties for legislators? (2/27/2011). In that article we used, as an example, a shindig thrown in 2010 by the American Resort Development Association for state legislators. Although the organization reported its $15,000 payment to its lobbyist firm, the firm reported goose eggs ($0.00) to the Ethics Commission. And it seems to have escaped notice.

At least the organization that threw the party (and Disappeared News has a small file of similar events) was required to report, and did so. If the Judiciary Committee has its way, even the most lavish entertainment will likely squeak through.

Much worse than the $200 limit would be no limit on “thank you” gifts. If I understand the proposed amendment correctly, a legislator could pass a bill favoring a corporation, and once that legislation is no longer pending, the beneficiaries could give anything, without limit, by way of thanks.

This amendment would also allow lobbyists or special interests to buy lunch for legislators and their staff every day throughout the legislative session. What a deal the Judiciary Committee is setting up. There would be no limits on deals like that.

Do these gifts work? Of course they do. Otherwise the companies would not spend so much money in exchange for influence. Why would ARDA, in the example we’ve used, spend $15,000 if they got no benefit from it? These gifts are not given out of a sense of philanthropy, or because legislators don’t earn enough and need handouts. They are investments.

There was nothing wrong with SB671 as originally written.  There’s nothing right with this proposed amendment. In fact, it would negate the gift law entirely.

If you don’t think Hawaii legislators should be fed at the trough of special interests, click on the link just above and submit testimony against the proposed amendment and in favor of the original bill. It’s easy to do that from this link. But hurry up and send something, even if it is a few words, if for no other reason than to save the health of your favorite legislator, who could become much fatter next session if this unhealthy amendment passes.