Honolulu’s choice of transit system—overhead rail—simply means that most of us will still be driving long after it is finished. This is because it is not extensible. It’s not practical, desirable, or affordable to fill the skies over Oahu with steel and concrete. So unless you live in a certain corridor, the train will bring no relief. But there is a stronger argument to be made about the train’s lack of effect on Honolulu’s horrible automobile traffic.

I started this article early this morning, after reading a comment somewhere on the web by a writer fed up with crowded highways and traffic. Apparently, anyone who opposes rail is this guy’s enemy because he wants to spend less time on the road and thinks the train will do that for him. So I thought I would re-post my theory on why the train cannot reduce traffic. In fact, it will increase traffic.

While I wrote, outside our window a tow truck was removing a pickup that had struck a lamppost, and some men were taking down the lamppost so it wouldn’t fall on anyone. Police cars had blocked off two lanes while all this was going on. A minor distraction. Back to work.

A short time later there was a loud crash outside. Sigh ..it was the latest of many collisions on the H-1 under the Nuuanu overpass. If only a train could really reduce traffic…  I figured these two collisions were some kind of sign, better put the writing aside. I needed to go out later and hoped the other drivers would be paying more attention by then. It felt like venturing out today would be like going into the Nepalese jungle at night in my underwear. The jungle broadcasts its warning cries, and so did the streets around the condo this morning.

We did go out later for a dim sum lunch in Chinatown and made it back safely.

So here’s my theory once again on why the train will not reduce traffic. Tell me where I’m wrong.

Let’s say the train was completed, and someone in downtown Honolulu decided to give up driving and ride to work each day. It would be a saving of both time and money. So this person cancels his parking space and does, in fact, begin a new life as a straphanging commuter.

Next day, though, someone else will be leasing that space. Parking in downtown is a valuable commodity. So while one car was removed from the road, another car has taken its place. Similarly, in Waikiki, a hotel worker decides to give up his SUV. There, too, his space will be filled by another who has been waiting for it.

So that’s the essence of my theory. Tell me what’s wrong with it.

I am pretty sure that traffic will actually increase. This is because the city is counting on development to take place around the major transit stations. Whole new communities. But guess what—each house will have a garage or parking space, and so the number of cars increases. It’s that simple. Of course, those cars are not for decoration, they will be used. So traffic will increase as a result of transit-oriented development.

Transit can be used as part of a plan to reduce traffic. The plan has to include a reduction or elimination in parking in the city center. That’s what Portland did. As they redeveloped, they prohibited parking, and each building had to have retail stores at street level. So the trams run past stores, bars, movie theaters, whatever, but no one can drive to those places.

It works for them. Honolulu will be deprived of the advantages Portland has reaped, simply by its choice of overhead rail. And there’s no fixing it if the rail goes ahead. 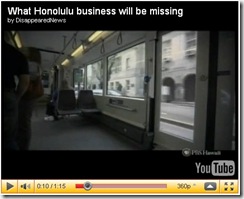 Honolulu will also be deprived of the thriving retail business that can develop along a grade-level tram line. If trains fly overhead, businesses trapped below won’t benefit and could be driven away. If people can spot a new store while riding a tram, they can get off and check it out. This can happen all the way to Waianae. Imagine that.  Or check out one of my earlier stories with a short video clip, here.

Remember, the stores outside the tram window have no parking for customers. That’s how traffic is reduced.  Same for the offices above the stores.

No parking. No traffic.

(Next day, though, someone else will be leasing that space. Parking in downtown is a valuable commodity. So while one car was removed from the road, another car has taken its place. Similarly, in Waikiki, a hotel worker decides to give up his SUV. There, too, his space will be filled by another who has been waiting for it.)


(Honolulu will be deprived of the advantages Portland has reaped, simply by its choice of overhead rail. And there’s no fixing it if the rail goes ahead.)

As we speak there are lawsuits related to Hawaiian burial grounds and rail. Because Oahu's rail will be elevated there will be flexibility as to the length of the beams and the placement of the columns to avoid those grounds. A ground level rail would never get past the lawsuits.

I checked with I think two of the parking companies couple of years ago, and they confirmed that at that time there were seldom vacancies for long.

On burial disturbances, again, I'm no expert, but for long distances the railbed is extremely shallow, and even in town, does not go deep. I really don't know much about this and am going by what I was told. In any case, we don't now have the option of grade-level since the city has chosen an elevated system. So I'm disinclined for the moment to do better research.