If writers type away in the jungle but no one reads it, who cares anyway?

As they wandered around the dense forest with chattering monkeys, and chirping cricket, they came across a small hut, almost hidden in the trees. As they stared in amazement, hardly believing their eyes, a man with long brown hair and beard, wearing a brown lungi, came out. He said, “I knew that I could not hide from you. I tried to conceal myself from you in the trees, when I saw you yesterday. Since you have found me, you had better come in.” It was a little hut with simple furniture, but one wall was stacked with books, and paintings were everywhere. Rani recognized the signature on them. “Are you the famous, and mysterious Tahir? I love your paintings, but nobody knows who you are!” she exclaimed. Tahir nodded and said, “I decided to leave society, which has been cruel and harsh to me. But here I feel at peace and I love the jungle. My paintings show my emotions for the jungle.” Babu and Reza shook his hand and said, “We are honored to meet you. Your paintings have touched us all, but you should come back into society and let us reward you.” Tahir shook his head, smiled, and said, “The mystery surrounding me is part of the charm of my paintings and I beg you not to reveal my secret.” He offered them a simple stew, made of rice, freshly caught fish, and greens that he had picked from the forest. … Rani suddenly asked, “ Would you mind if we stayed a few days here with you?” Babu, who had been silent, also nodded. Tahir smiled, but said, “My hermit’s life might not suit you.” Rani replied, “Your hut is charming.”

[snipped from Lost in the Sundarban Jungle by: alvinapinkglasses]]

“…Your paintings have touched us all, but you should come back into society and let us reward you.”

If you wander the jungles of Kaimuki you may discover a little hut, stacked with computers, where talented people toil to produce some good articles for the web. Unfortunately, society is mostly unaware of their efforts.

I was encouraged to learn that the Civil Beat paywall had developed a few cracks. At last, perhaps the model was evolving. Perhaps one day we would all benefit from the fruits of their labor, and their writing could become part of the public record for future researchers. Well, maybe it’s happening.

Did you know? You can now share any full article with your friends & family! Free for occasional readers!

I wouldn’t mind being an “occasional reader” whatever that means, so this may be progress. Probably they are monitoring my IP to see how “casual” I am. I don’t really know how they do it, but that’s one of the common ways. It comes with problems, though.

Indeed, the Google cache, which is what defines our Internet history more or less, shows only this much of the first of their listed articles following the link from the home page: 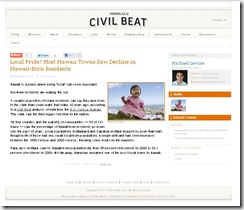 Not much, just about the same as under the full paywall.

If you go to the main article, here’s what it really shows:

Will the missing majority of the text still be found in a Google search in the future? I don’t know.

Probably this is a good enough compromise. Writers will be cited, and as long as they keep the URLs open, readers even in the jungle will be able to access the page and refer others to it.

Good writers, especially young ones, need to be cited in this competitive world. Stay hidden in the jungle too long and people forget. Your next employer needs to find your recent work in a Google search.

A successful website (if we use measures that may or may not concern Civil Beat) needs to be frequently cited. It needs to be read. So for the rest of us, it’s good to see the paywall coming down.


Update: I forgot to include Andy Parx’ observation on the crumbling paywall:

We wonder what those who paid for a year are thinking... probably much the same thing we did when we got to Woodstock after having paid 18, 1969 dollars for tickets and found the fences on the ground.

Oh yeah, Civil Beat. What ever happened to them?
Standing on their principles regarding "profit" when most folks are pinching pennies, oh yeah, that's right. Don't feel bad for them, they have paying jobs and the "local elite" read them (don't they?)
The rest of us will go on providing and reading the tons of quality "free" content out there :) (like you, Larry!


Cloudia, I pay for some things, but I can't pay for it all. Like public radio, not everyone pays. My point is that there is a common model which is voluntary payment. Articles are mostly part of a record which has been free. Maybe their new model will do that for CB as well. As to paying for discussion, that's fine for the folks who want to do it and can afford the steep fee.

I also believe that most journalists want their writing to be read widely. Again, this new change in policy might accomplish that, though the Google cache problem might prevent it one day.