Fire departments on three islands are warning residents against a new type of novelty pyrotechnic in what might be the most eruptive New Year's Eve celebration in years as Oahu faces a looming ban on fireworks.
…
The lanterns rise when a flame is lit and can reach altitudes of 1,000 feet but are at the mercy of the wind. Fire officials fear they could land anywhere — in trees, on houses or in power lines.   [Fire officials fret over new sky lanterns (Star-Advertiser,12/31/2010)]

The warning is justified, from my personal observation. The photos below were taken on August 21, 2010 during a festival in Chinatown. Across the stream from where I was standing, several people attempted to launch some of these flying firebombs. Most of them did not take off. In the first photo below you can just make out, at the extreme lower left, a dying glow in the stream. Several went down into the water instead of up into the air. Another couple died after scooting a few yards along the sidewalk.

Finally one did rise up, and you can see it at the top of the first photo, above the streetlights. The flame was burning strongly, probably hot enough to get it airborne. 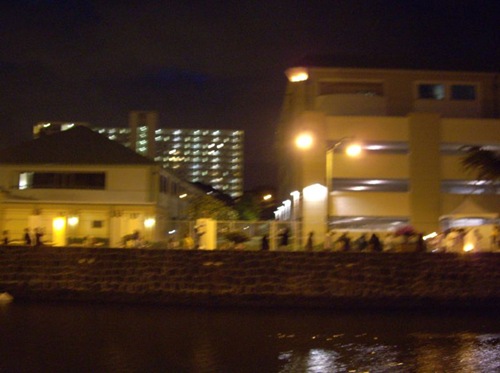 Once launched, of course, it is out of anyone’s control. This one continued to rise at first. Here it is ‘way above the buildings, but still burning hot. 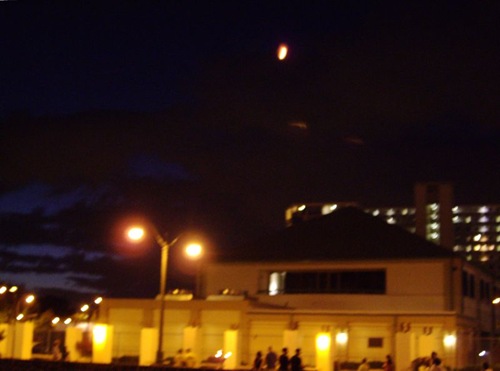 What happened next was that the firebomb caught a breeze and headed towards the ocean. It rose steadily at the same time and became just a bright fast—moving star. My camera was not up to picking up a small bright speck against the dark sky.

Chinatown is pretty close to the ocean. Had one of these been launched farther inland, it could certainly have come down anywhere. Unlike the illegal fireworks that might land on a roof, this one contains significant fuel that could easily ignite a fire.

According to the Star-Advertiser story:

Larry Lomaz, chief executive of Pacific Fireworks, said the fire in the lantern goes out a minute to 90 seconds later.

"When these things reach an altitude, they go out," he said.

That was not the case with the object I photographed and watched. The second photo was shot at 19:37 and the lantern was still flying and visible (hence, still burning) 16 19:42. Whether Lomaz is incorrect or whether those who launched them added extra fuel, I cannot say. Certainly, he, as a seller, cannot control how anyone uses them. The one I photographed did not just scoot along the sidewalk or fall into the water—was more fuel added so that the flame burned more fiercely?

I was curious about the legality of launching a flaming object into the sky, especially since there were fire department personal standing right near me who must also have been watching the scene across the water. I asked, but they didn’t have much to say.

IMHO these should be banned. Launching one that sets a fire should be treated as arson. But better that they not be sold in the first place.

Larry, from our perch on Waialae-Nui Ridge, we saw more than a dozen of those fire bombs launched on New Year's Eve, and they stay hot a lot longer than 90 seconds -- more like 10 minutes, as they drifted toward and over the ocean before losing their illumination. Three were launched one street away, so we had a close-up view as they rose straight up to our eye level and then caught the breeze. Somebody will figure out how to attach a fuze that ignites fireworks or rockets several minutes into the flight. It's only a matter of time.


Doug, thanks for your report.

Yes, I think these could be a problem. The newspaper did not go far enough in their story.