This time, although it’s not clear whether the writer drove a car after drinking, she did encourage others to do so by writing that “You can’t beat free parking, affordable beer and sports on flat-screen televisions.”

Let’s get real. it’s not just married couples who go to bars to drink, where one can be the designated driver. Hardly. So many will have come on their own, and if they take advantage of free parking, it’s because they are driving their own car.

The writer and her companion consumed two pitchers of beer, she wrote. Let’s make some safe assumptions about her weight and how long they stayed at the bar. Assume 150 pounds and a long stay, say 3 hours. Calling the bar, they stated that their pitcher holds 48 ounces, or the same as four 12-oz cans of beer. The alcoholic content is 5.4%.

Plugging this in to a handy calculator available on the web: 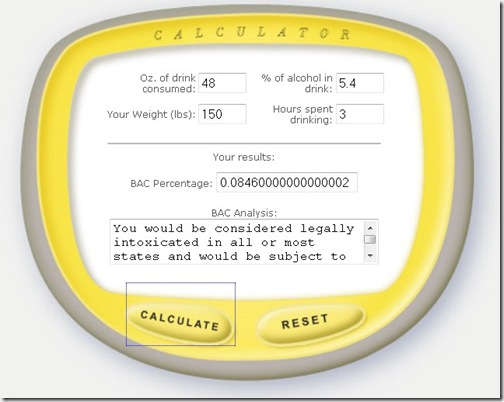 So with these assumptions, the writer would likely be over the legal limit to drive in Hawaii.

Now, if they spent only two hours drinking, she would have been at 0.0996, according to the calculator. Or, she would have to weigh at least 177 pounds to just skirt the legal limit.

Just how impaired is the legal limit? From the Wikipedia, this snip:

Sure, she could just have daintily sipped a bit of her drink, but that’s not what she’s advocating in this article. If she did, and if her companion drank most and then drove, that would be even worse.

She also noted “everything was slightly over-salted” in describing the food served to her. Over-salting  encourages excess drinking, but that didn’t raise any red flags for the writer or for the Star-Advertiser editors.

The newspaper may not perceive its responsibility in encouraging unsafe drinking and driving, but they might also think twice about paying  reporters to do that. The paper endangers not only the reporter but also anyone she might kill or injure should she drive after drinking on the paper’s dime. Again, this article doesn’t say she drove, but it does encourage others to do so.