My Way or the Highway

According to DBEDT, there is no silver bullet in decreasing Hawaii's oil dependency -- a portfolio of renewable and energy efficiency is needed -- BUT this wind proposal must be part of the solution.

The preferred solution is to build 100-200 wind towers on Lana`i and Moloka`i. (each as tall as the First Hawaiian Bank) 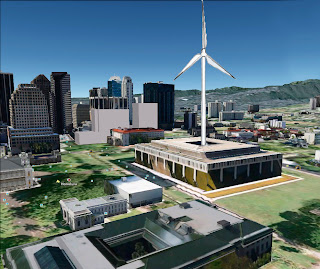 This EIS is a self-serving document designed to keep Hawai`i hostage to distant power plants and massive new transmission lines instead of focusing on distributed generation which is the road to sustainability.
Henry Curtis
ililani.media@gmail.com
# # #

The Kamaoa windmill farm was in installed at South Point of the Big Island in 1986 to produce 7.5 megawatts of electric power. By 2006 the the rusting dilapidated site was shut down. Centralized windmill farms will not be a reasonable solution for Hawaii. Distributed solar energy (for hot water and photo-voltaic electricity as well as demand destruction) is the way forward in Hawaii. I spoke to a table full of Aha Moku Council representatives from Lanai about the proposed windmills. They were all against the idea.

This idea that state officials on Oahu can dictate to the outer islands what they should do to keep Oahu happy reminds me of the attempt to jam the Superferry down our throats for the convenience of SUV's full of Mililani opihi pickers.

Obviously, Oahu is running up against the ugly reality of overpopulation and resource/infrastructure inadaquacies... so much will have to change there in the next few years. Enabling them to continue on their present course by plundering the outer islands won't be very acceptable.

The undersea cables are expected to cost between $1 billion and $2billion to the taxpayers of Hawai'i.

The undersea cables will deliver energy that offsets 15% of Oahu's electric load.

The numbers aren't comparable because the 15% is off the entire island electric use and the 40% savings is from residential use. But I have to think that when you adjust these numbers we'd see that using the money to directly benefit the taxpayers (instead of producing $250,000,000/year income for Rupert Murdock) would offset the same amount of electricity and put that $250,000,000/year in the pockets of our residents.

This scheme by Gov. Lingle is a rip-off of both the taxpayers who are subsidizing this private for-profit operation and the rate-payers whose rates will go up.


See http://friendsoflanai.org/ for Lana'i residents who oppose the wind farm. I think they go a little overboard but the crux of their case is valid. They appear to have grabbed hold of some bogus info opposing wind energy in general with which I disagree and I certainly don't agree that nuclear is anything that should be considered at all...but the rest of the info is pretty good.