What Can Brazilian Prisons Teach Us?

Lorenn Walker, JD, MPH recently returned from visiting prisons in Brazil. She even stayed overnight in a male prison. Except they do not call it a prison, nor do they call the inmates “prisoners”.


Her talk was held at the Hawai`i Supreme Court where she was introduced by Elizabeth Kent (Hawai`i State Judiciary’s Center for Alternative Dispute Resolution).

Lorenn used to be a Hawai`i Deputy Attorney General assigned to the state prison system.

The inmates are called recuperandos (“people undergoing a process of recuperation”). They do not wear uniforms. There are no guards wandering around the facility. When a new person arrives, their shackles are taken off at the door. Emphasis is on socialization, communication, literacy, job training and rebuilding connections to families. The facilities practice Restorative Justice and are affiliated with the “Association for the Protection and Assistance of the Convicted” (APAC).

Lorenn Walker described one facility: “It is more progressive that most drug treatment programs in the U.S.” The “prison” encouraged her to take picture inside the facility. It looked like a campus. 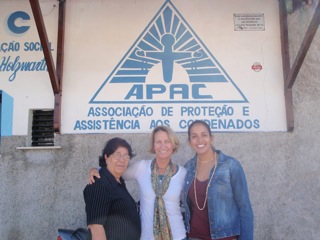 Beatriz, Lorenn and Carla outside the men's
APAC in Itauna, Minas Gerais, Brazil

Brazil is decentralized so a town or city must request that a facility be opened in their area.

If a Judge recommends a convicted person to attend the facility, then a panel of current and former inmates reviews their record to determine the appropriateness of that person joining their facility. One major consideration is that the person should have connections to that community. Handicapped people are eligible. There is a waiting list.

The facility has gardens, workshops with tools, a library, basketball courts, and other methods to keep people busy.

Lorenn Walker: “There are no drugs there. ...Anyone who has worked on prisons in the U.S. can tell you that you can find more drugs in prison than on the streets.”

Catholicism is part of the fabric of Brazilian culture. These facilities are Catholic based.

There are examples of both faith-based and non-faith-based Restorative Justice in the U.S.

Chuck Colson (imprisoned for his role in Watergate) promotes Restorative Justice thru the Sycamore Tree Project.

Lorenn Walker and Kat Brady have conducted Restorative Justice Circles in Hawai`i prisons. Lorenn Walker on imates: “We’ve been programming them for failure, [and] we need to program them for success.”

Kat Brady: The Circle focuses on three things: Who was harmed? How were they harmed? What can be done to repair the harm? “It is not easy, dragging up all these things that you’ve repressed, examining them, and repairing the harm [but] it’s transformative.”

I (Henry Curtis) remember visiting the Danbury Federal Prison around 1975. The facility was a minimum security federal prison whose inmates included tax evaders, draft dodgers and a few drug dealers. The cell doors did not lock, guards within the prison did not carry weapons, and the inmates cooked for the guards. Thus the guards treated the prisoners with respect.

I don't expect this type of facility to happen in American anytime soon. With the privatization of our prisons we look at them as a way to make a profit.


fascinating, thanks Henry for the article, and thanks Kat and Lorenn for the good work you are doing.