Hawaii’s Thousand Friends is based on the 1000 Friends of Oregon. Oregon Governor Tom McCall (1967-75) and Henry Richmond founded 1000 Friends of Oregon in 1975. Their goal was to protect Oregon’s quality of life from the effects of uncontrolled growth. JoAnn Yukimura and Marilyn Bornhorst attended a land use conference in Washington State (c1979) and brought back the concept to Hawai`i. Thousand Friends currently exist in several places including Hawai`i, Kaua`i, Iowa, Maryland, Wisconsin, Oregon, Connecticut and Minnesota.


JoAnn Yukimura was a founder of the 1000 Friends of Kaua`i. She has a B.A. in psychology (Stanford University) and was Kaua`i Chair for the 1970 U.S. Senate campaign of Tony Hodges -- that experience motivated her to go to law school. She graduated from the University of Washington Law School. Yukimura served on the Kaua‘i County Council (1976-80; 1984-88) and was Kaua`i Mayor (1988-94) becoming the first woman of Japanese-American ancestry to be elected mayor in the United States.

On April 10, 1980 the “1000 Friends of Kaua`i” was registered with the State. Its mission is to “promote sound social economic land use planning and decision making on the island of Kaua`i.”


Marilyn Bornhorst encoraged the formation of Hawaii’s Thousand Friends. She served as Honolulu Councilwomen (1975-88) and as Chairwoman of the Democratic Party (1996-98). The first official meeting was held on January 7, 1981. On May 28, 1981 Hawaii’s Thousand Friends was registered with the State. Its mission is “to monitor and evaluate environmental, land & water use proposals and decisions.”

Cynthia Thielen convinced the owner of a hotel on Fort Street Mall to give HTF a rent free office. This first office for HTF became headquarters for Executive Director Barbara Beck.

Muriel Seto fought tirelessly to protect Hawai`i from overdevelopment. Starting in the 1960s, she championed the protection of Kawai Nui Marsh. She co-founded the Kawai’nui Heritage Foundation, co-founded Waihona 'Aina (1995) and was a long-time member of the Lani-Kailua Outdoor Circle. HTF focused on Kawai Nui Marsh in 1982, taking it on as one of their core values. 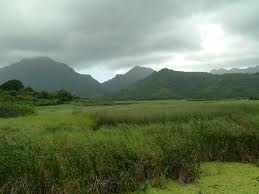 Ulupo Heiau built c.900 A.D. located adjacent to Kawai Nui Marsh, may be O`ahu’s largest heiau. A 450-acre fishpond was located next to it.
In 1972 large landowners sought to build a shopping center to rival Ala Moana in Kawai Nui Marsh. This action would have destroyed the wetlands. Over a period of three decades, activists sought to protect the marsh.

In 2005 Kawai Nui/Hamakua Marshland Complex became the 22nd U.S. Wetland of International Importance The United States is one of 144 signers of the Ramsar Convention (1971), the only international agreement solely dedicated to worldwide protection of wetland ecosystems.

Muriel Seto received several award including from an Alu Like Award (1986) and the National Environmental Woman of Action Award (1993), was appointed by Governor Cayetano to the State Environmental Quality Control Commission (1994), was named Hawaii’s Thousand Friends Unsung Hero of 2005, and received a Certificate of Recognition from the Kailua Neighborhood Board (2006).


Mike Wilson, a co-founder and former HTF President, was named State Director of the Department of Land and Natural Resources (1992) by Governor Cayetano.

Donna Wong has come to symbolize Hawaii’s Thousand Friends. Active in the PTA and the Olomana Community Association, she ran for and was elected to the Kailua Neighborhood Board in 1980. In the mid 1980s she co-founded Hands Around O‘ahu to work on protecting agricultural land from golf courses.

She became the Executive Director of HTF in 1990. The State House of Representatives recognized Donna Wong and HTF "protecting and advocating for responsible land use, planning and management of Hawai'i's 'aina" (1998).

Donna Wong received the 2009 Women's History Month Award from the Hawaii State Commission on the Status of Women. I attended the reception held in her honor at Washington Place. Commission Chairwoman Carol Philips stated: "Donna Wong has been and remains one of the most knowledgeable and staunchest defenders of Hawai'i's fragile environment in modern history."

In 1993 O`ahu Sugar announced it would cease operations in 1995 setting off an intense fight over water. The Hawai`i Supreme Court noted that the monumental case (Waiahole Water) was of "unprecedented size, duration, and complexity."  HTF stressed that water is protected as a public trust resource. HTF attorney Jim Paul convinced the Water Commission and the Hawaii Supreme Court that stream water and the flora and fauna it sustains are public trust resources that the state has a trust responsibility to protect. HTF has co-sponsored at least eight Peoples Water Conferences.

HTF works on cultural issues. In 1985 “HTF received the first of four $125,000 grants from the U.S. Library Services through Alu Like to begin 5-year Hawaiian Cultural Sites Database Project, a bibliographical inventory of cultural places” and also “received grants from Office of Hawaiian Affairs to do archeological survey of Kaniakapupu and complimentary map survey of O'ahu sites of significance.”

HTF opposed Puna geothermal development because of the “impact on cultural integrity of the area and impacts on human health and the environment” (1985).

HTF initiated “cultural exchanges to the Windward and Leeward farms, fishponds and taro lo`i offered keiki the opportunity to learn about other places and ecosystems” through the HTF Kalihi Stream Project (1998-2009), and “cultural exchanges [also occurred] between Hoa Aina o Makaha in Waianae, a rural educational organization, and students from Kalihi.” The project was sustained “with funding from DOH Section 319 DOH grants, the National Fish and Wildlife Service, the Cooke Foundation, and the Hawai`i Community Foundation.”