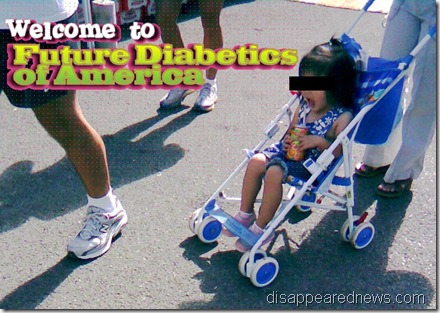 Many of the kids at the Saturday KCC Farmers Market clutch a little water bottle in their wee hands. Farmers Market shoppers are savvy folks, generally speaking, and they’re into healthy eating for themselves and for their kids.

I snapped this pic of a very cute little girl with much sadness. She’d probably be happy with water, but her mom has given her a very sugary soft drink instead. I’ll just guess that it wasn’t the first and won’t be the last.

From there to a KFC Double Down sandwich is a natural step.

I suspect that the sugary drinks may be a kind of “gateway drug.” Once addicted to them, a lifetime of empty calories and excess may lie ahead.

Check out the Center for Science in the Public Interest’s 2010 Xtreme Eating Awards. Some of the “winners” are available here in Hawaii, but of course we have our own local caloric cuisine as well. I’d rather not know what is in that jumbo Katsu Curry plate lunch I used to eat all of.  Hmmm… could submit that for the 2011 awards.

We have California Pizza Kitchens here. Their Tostada Pizza with Steak clocks in at 1,680 calories, 32 grams of sat fat, and 3,300 mg of sodium, according to the article. That doesn’t quite fit the image of lean California cuisine.

For reference: the recommended daily intake for sodium is no more than 2,400 milligrams, for fat no more than 65 grams, and for saturated fat, no more than 20 grams for a person on a 2,000-calorie diet.

As to their pastas:

Some of CPK’s pastas reach 1,500 calories, many of them from white flour, which goes well with the white flour in the platter of complimentary bread. Welcome to corporate California cuisine.

They cleverly describe eating one of CPK’s pastas as committing “pestocide.”

We also have P.F. Chang’s in Honolulu. Their Double Pan-Fried Noodles Combo has 1,820 calories, and:

I know the little girl was enjoying her sugar drink. The photo was taken a long time ago. I hope by now the family is into better nutrition. Serving healthy food and drink is easy and is also cheaper now and in the long run.

Maybe there could be a tent at the Farmers Market to give out pamphlets on healthy eating (hint).

(“Future Diabetics of America” seems also to be a MySpace group. There may be other groups with that name. No connection. I thought of googling it after I lettered the photo.)

Calories and saturated fat are what God put into food to make it taste good.

One of my fav meals: double meat Whopper with cheese and bacon, extra lettuce, tomato and mayo. Side order of large fries. three pints of Stout.

I'm 61 years old, been eating like that for decades and have excellent blood work results. Living on good genes.