How will Obama get re-elected if he keeps alienating one group of voters after another? This news is a stab in the back to those who work in tech jobs in this country. Or to those who used to have tech jobs, and are now looking for employment. It will especially hurt Hawaii, which is trying to diversify its economy.

Despite President Obama's pledge to retain more hi-tech jobs in the U.S., a federal agency run by a hand-picked Obama appointee has launched a $36 million program to train workers, including 3,000 specialists in IT and related functions, in South Asia.

Following their training, the tech workers will be placed with outsourcing vendors in the region that provide offshore IT and business services to American companies looking to take advantage of the Asian subcontinent's low labor costs.   [InformationWeek, U.S. To Train 3,000 Offshore IT Workers, 8/3/2010]

We’ve written before how the Obama administration saved the auto companies but not the auto workers. Wall Street is happy that American auto companies are profitable and could care less, of course, about production moving to Mexico, Canada or China.

With job losses projected to increase steadily (not decrease), does it make any sense at all for Obama to support outsourcing jobs? 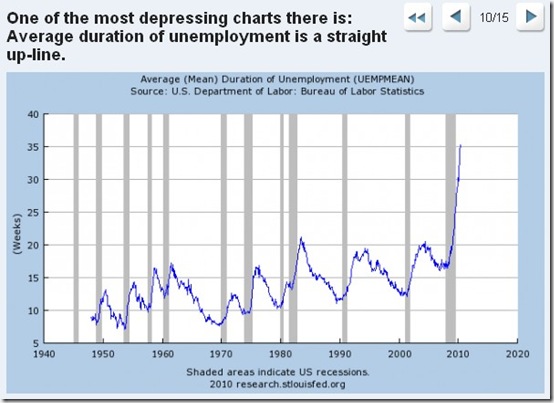 (Chart snipped from the must-read article, A Very Graphic Guide To The Horrendous State Of The US Jobs Market (Business Insider, 8/4/2010).

When the American people realize that corporate control of their government has meant support for big banks and foreclosures for them, there could be trouble.

Governments at every level are bulking up on riot gear and demonstrating forceful control of protests perhaps as practice for the time when people may begin to react. Watch for military to accompany police and for an increase in guns-drawn police interventions.

It won’t matter whether the occasion is an anti-war protest or—this really just happened—a raid on a health food co-op. See the video: Police Begin "Guns Drawn" Raids on Organic Food Stores in California. The clip includes security camera footage clearly showing at least one policeman with his gun drawn and ready to fire as they walk around the shop. The police are clearly in no danger from the yoghurt, but here’s an opportunity to show force.

In the meantime, now that you have the disappeared news, it might help to call representatives in Congress and try to end support for outsourcing US jobs. Write to the newspapers too.

Think about it: Hawaii wants to become a high-tech center of the Pacific at the same time as the federal government supports sending just those jobs off to South Asia.