The lost art of copy editing

There’s so much I could rant about today. Why do Republicans hate their constituents, for example. Or what family values did Sarah Palin actually teach her kids? Iran's Ahmadinejad survives grenade attack on his convoy. Heavy stuff.

I thought instead I would rant for a moment on something dear to my heart, as a former copy editor of my college newspaper, and as a member of a family of copy editors. Typos. Excessive typos.

Our breakfast conversation these days is something of an Easter egg hunt. We can’t help noticing the typos in our new daily paper.

I’ll admit to not catching the most, but that’s why copy editors have a copy staff (that’s how we met in college).

Some days it’s easy: The huge icons in the weather report (a waste of space, IMHO) might have the same day of the week given twice. I wouldn’t mind a week with two Saturdays. In Honolulu’s new paper, that’s possible.

The Star-Advertiser makes the game easy, with a couple of juicy examples almost every day. Without having taken a formal survey, I’ll venture that there are many more typos than were found in the Honolulu Advertiser. Throw in headline writing, which used to be done by the copy editor or managing editor, and there is no end of amusement.

What’s wrong with this picture (snipped from the front page of today’s Star-Advertiser)?

Clearly, no matter how many flights Alaska Airlines (not Alaska) may add, it can’t have any effect on tourist arrivals for the first half of 2010, which is already behind us.

Ok, turning some pages, we learn:

Well, not exactly. Rice isn’t a contaminant in musubi, it’s the main ingredient. Without rice, it’s just spam and seaweed. Now, rice can certainly be contaminated.

Ok, back to page one. 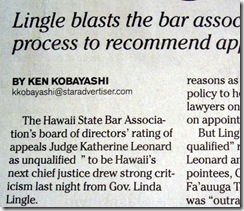 Right in middle of the fourth line of text in the lead article is a floating quotation mark. There’s no word attached at all.

It’s possible your edition of the paper doesn’t have this mistake, I understand that corrections can be made on the fly. But mine does. 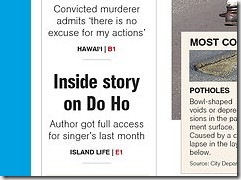 I know, typos happen. For a little balance, here’s an old favorite.

The headline issues are more complicated, though. Monday seems difficult for the Star-Advertiser. This Monday the big news it seems was that school is starting. Awesome. Was there nothing else of importance happening in Hawaii, the nation or the world? School starts? It would be news if school did not start.

The week before, it was Dry conditions leave isle farms parched. Ok, but that was the day after the Wikileaks news broke, a blockbuster story if there ever was one. Dry conditions is evergreen, it could have been used at any time, and I’m sure the editors would differ with me, but it’s not front-page stuff.

In the old days, the pressure was on us to produce really clean copy before it went off to the printers. Of course, a few misspellings and other typos got through. Our handwritten corrections might not have been clear, or the Linotype operator might have made a mistake. There could have been a wrong letter mixed in someplace in the machine, or an upside down one, and so forth. We don’t see upside down letters these days (though the Star-Advertiser did manage to have, if I remember correctly, a bold lower case “q” of a different font in the middle of a paragraph one day. It was kind of nostalgic, as though they still had a typesetting machine hidden someplace at Restaurant Row).

It was painful, but since we would have to pay for AAs (Authors Alterations), if making a correction would result in a long paragraph needing to be reset, we might sometimes let it pass, knowing that half the school would mock us when the paper hit the street.

These days, though, finding many mistakes in a newspaper indicates that costs are being cut. It’s something they can fix. So I hope it’s ok to comment about it.

Let’s close with a video of an actual Linotype machine. When newspapers depended on these, one had to expect some errors in the process. We couldn’t conceive of a different way of producing a newspaper any more than a stagecoach driver could imagine an aeroplane. All we envisioned for the industry was better or faster machines. No one dreamed of electronic composition, word processors or spell checkers.

Click the thingy near the lower right for full screen.