Chinese straddle train for Honolulu? Anyway, check this out.

Mufi’s train in the sky probably will never get to Waikiki—there would be a popular rebellion if the city ever tried.  For the same reasons, this one won’t either. 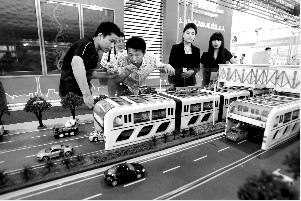 As with many way-out proposals, it likely will never be built.

Still, it’s interesting to contemplate a transit system that could co-exist with car traffic and cost less to build than Mufi’s system.

No, I don’t think this is the right system for Honolulu. I would feel like a guppy about to be devoured by a whale if one of these things came up behind me. I’m still for a tram (if it has to be rail) that will help bring retail development to Honolulu.

As long as we’re dreaming, the Terrafugia transit solution is making progress. Just skip the highway altogether, or follow along from above it. I’ve had my eye on this company since IEEE Spectrum identified it as one of the worst ideas of the year a couple of years ago. The website includes a cool video. Get one of these and thumb your nose at the train.

And this new entrant: if you have some empty lane ahead of you, why not use it as a runway and take off right from the road.