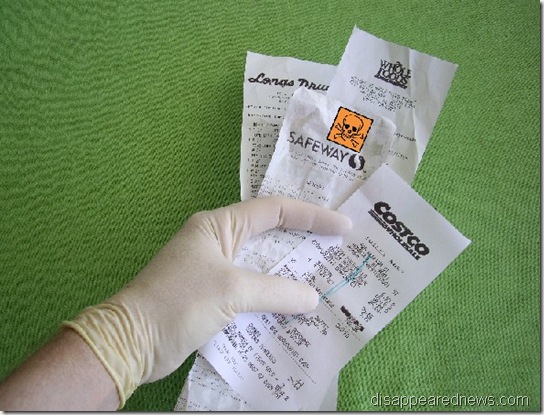 Our meal at Zippy’s last night was great, until we got our check.

We looked at each other with that “now what?” look, because over roast turkey and mashed potatoes we had been talking about strategies to get BPA (bisphenal A) out of cash register receipts in Hawaii. After all, these innocent looking pieces of paper might kill you. Reading the recently released lab tests was scary.

I wonder if you've had a chance to read my earlier article, Safeway receipts contain potentially dangerous amounts of BPA, but look out also for CVS, Whole Foods, McDonalds, etc. (7/28/2010)? In that article I wrote about the research showing that common cash register receipts cause up to 1000 times the exposure to BPS (bisphenol A) as other sources.

And so here we were, faced with having to handle one of those potential deadly receipts ourselves. No, I have no idea how much BPA is in a Zippy’s receipt. I just naturally assume the worst.

I don’t think trying to avoid corporate pollution is a bad thing. Look, we switched to organic apples, for example, because we learned that other apples may be heavily sprayed with pesticides. We try to eat responsibly, and I’m working on getting more exercise, etc.

We’re not into tofu burgers and all that stuff, just trying to survive on a planet where food is sold for corporate profit and not because it’s good for you.

Concerned mothers, advocates and environmentalists have been somewhat successful in getting BPA out of baby bottles, where it is found in tiny amounts but is recognized as a big health problem. A little is found in canned goods, and that’s a problem too. But how to get the mind around the fact that 1000 times more BPA could be be on that cash register receipt sitting on the table in front of us?

We can win the baby bottle battle and lose the BPA war anyway.

Merely touching the receipt puts BPA on the skin, where it sinks in, or gets onto food that we handle. Or we might touch our mouths. Remember, 1000 times worse than a baby bottle. Yes, it depends on the store. Some are safe, some are not.

What to do? We picked it up with a napkin. Of course, earlier this week I must have handled a dozen or more of these deadly things, I’m in trouble already, will one more really hurt me?  Probably not, but I put it and the napkin in my pocket.

Almost all of us have BPA in our bodies. A study found that 95% of Americans tested had BPA in 'em. The study also said,

It has been hypothesized that exposure during early development to xenoestrogens such as BPA may be the underlying cause of the increased incidence of infertility, genital tract abnormalities, and breast cancer observed in European and US human populations over the last 50 years

Almost every day I'm handling one or more of them. What am I supposed to do, put on rubber gloves when I check out at Costco?

And how to break the news to Safeway cashiers that they're doomed? Safeway receipts were the worst in the study mentioned in my earlier article. Way bad, much worse than the others. Lots of BPA that penetrates the skin.

Every time cashiers rip a receipt out of the printer and hand it to a customer, they're adding more BPA to their body big time. And they don’t even know it!!

It’s time to get the word out. The best solution to this is that Safeway and other retailers switch to non-BPA paper. It can easily be done. But they won’t do it unless the public (and maybe their cashiers) make a big fuss.

Because no one will believe that a cash register receipt could kill you.

"We’re not into tofu burgers" Are you seriously saying that as if it you were missing out on a good thing? Haven't you heard? ALL SOY (AKA TOFU) IS GMO!!! WAKE UP! TOFU IS DEATH-FU!


The tofu we eat is non-GMO. Your warning is well-taken, though. Avoid the death-fu product. I'm with you on that.