Yes, although your daily paper may want you to forget this, it is news that should not be ignored. There’s even a federal law confirming the truth of the history they refuse to print. 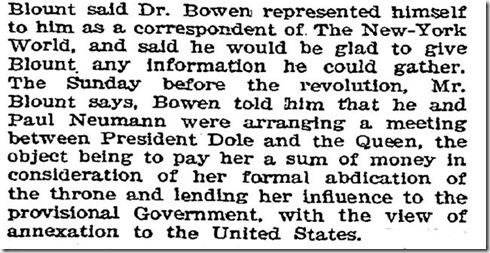 Also, the declaration of the Republic was not a single, static event. There was considerable debate in Congress on resolutions  condemning the overthrown and proposed annexation. For example, this snip from the 1/25/1894 New York Times will give you an idea of the complexity that we lose in simplifying Hawaii’s history: 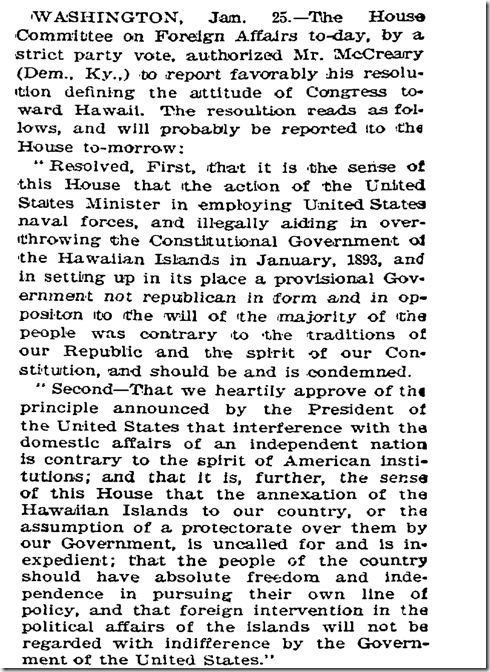 Each article is much longer than the snips above. It would be worthwhile to skim the New York Times for a complete account of the Congressional debate. No doubt this has already been done. If not, the articles are available on-line for the harvesting..Catch them before the Times imposes its paywall at the end of the year.

If you’re not familiar with Hawaiian history, beware of websites that have chosen to re-write it. The true picture of the overthrow is not pretty, nor can the acts of the US government be justified or whitewashed. Google cautiously.

I can't get enough of the truth about the treachery, deceit and cowardice that went on then and still continues up to the minute. Perhaps a hawaiian-made movie of the whole affair, including the 'bayonet constitution', the overthrow, the annexation and that phony statehood vote? Maybe we can get that black movie director to handle it.


Larry, thanks for posting this. The history of Hawaii is becoming clearer and clearer, and in the long run, the future can only bring justice and resolution.


This history should be taught in post-high school classes, maybe create a holiday for February 14 (Captain Cook's Death) the day Hawaiians stopped/attempted to prevent the further spreading of disease, robbing of food, and genocide.
Mahalo nui loa for all of your hard work in keeping the masses informed.

The overthrow of the Hawaiian monarchy was clearly illegal and for the benefit of a few rich and mostly white folks, but not exclusively. Why didn't remaining Hawaiian royalty back the counter evolution in 1895? Why did all of Hawaii roll over so easily to a few white guys taking over a few government buildings? I think its because the rest of the Hawaiian royalty stayed comfortably rich. After the illegal overthrow, the next truth that will have to be confronted is that many Hawaiian monarchs, despite being lawful and rightful rulers, were near incompetent in the administration of a government. Even Kamehameha III was moving towards annexation at the point of his passing.


Cook died over a dispute about a stolen canoe...no "high minded" attempt by Hawaiians to prevent anything.

It was a damn accident!


There's little doubt that the US was involved in imperialistic shenanigans in Hawaii, as in many other places (the Philippine-American War, any country covered by the Monroe Doctrine, Iran, Iraq, Afghanistan, Iraq again, etc.).

By comparison the shenanigans in Hawaii were relatively mild, as they were helped along by convenient native elites who sought to extract western style "and-his-heirs" land titles from what was essentially a feudal system based on land management with no guarantee of heritability (oversimplification, yes). This led to the creation of the constitutional monarchy as a way to ensure that the ali'i and their descendants both retained their title and lands within their respective families. Invariably it also led to the Great Mahele of Kamehameha III (which contrary to spin from the sovereignty community was not initially the disaster many claim it was, see http://www.amazon.com/Kahana-How-Land-Was-Lost/dp/082482590X for a great case study). Greed on the part of foreigners and natives drove the process every step of the way.

What IS justice in such a context? Or is the best we can hope for resolution?