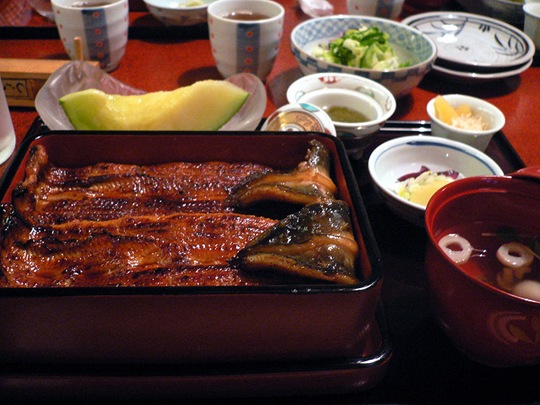 Today is Doyo-no-Ushi-no-hi according to the Japanese calendar. When we lived in Japan, it was the day when we just had to eat some unagi. Everyone did. It was, by custom, the hottest day of the year (and although it’s already mid-afternoon as I write this, it’s getting hotter every moment)!

The day wanders on the Western calendar. It’s calculated by the ecliptic path of the sun, so each year it is different. And there can be more than one of them (good for us eel lovers).

So although unagi (eel) is a popular dish at any time in Japan, on this particular day there was competition for seats at neighborhood eeleries everywhere, and supermarkets were piled high with fresh and frozen eel.

Trouble was, all sorts of eels were served that had been imported from Taiwan or elsewhere and which were, frankly, not at all as good as the local product.

Except at the top-notch eel joints. Since I was an executive in a joint-venture company, I had access to places that most foreigners didn’t even know existed. We did very well in the eel department.

In Hawaii, the holiday is hardly known at all, so there is no mad rush at the supermarket.

For the six of you who already know about Doyo no Ushi no Hi, you’ve either bought your eels at Don Quijote (theirs are imported from Japan; Costco’s are from China), or you’ve made your reservation for a kabayaki lunch at one of the finer restaurants.

To learn more about how this holiday fits into Japanese custom and its seasonal cuisine, I recommend this article. There are handy links there on how to prepare unagi yourself.

(This is a repost of a 7/24/2008 article. In the meantime, we have become aware of the Monterrey Bay Aquarium report resulting in their classification of eels as Avoid. It isn’t clear how the Japanese-origin eels sold in Don Quijote, for example, are raised.)