The Hawaii State Ethics Commission today announced the firing of Dan Mollway, its Executive Director, ending 24+ years of service that it had as recently as mid-2009 rated as exemplary.

Disappeared News has faxed a request to the Chair of the Commission requesting copies of the minutes of its executive sessions that included discussion of the termination of Mr. Mollway.

The request is based on the strong public interest in the process by which the Ethics Commission carried out its action, a process that has been criticized in public testimony presented to the Commission. The Commission has declined to post the testimony on its website, but under Hawaii’s public records law it must provide copies to anyone who requests it.

This afternoon, after a 2-hour closed-door session, the Ethics Commission announced the termination of the ED. The public portion of the session, which included testimony offered by one person, later became contentious as the Chair sparred with Mr. Mollway’s attorney on the conduct of the Commission’s investigation. 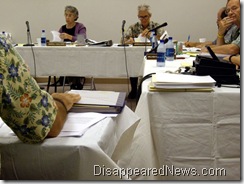 An inch-thick binder of information that was intended to be made public by the Commission rests on the table in front of Mr. Mollway’s attorney, Paul Saito (pic). Mr. Saito said that it omitted material that he had submitted that should have been included. Mr. Saito stated that the file does not represent the private record and should not be released.

The Executive Director serves at will, which means that the Commission could simply have dismissed him. Instead, the Commission undertook a long drawn-out process during which allegations were made of absences and other matters and only partially released to the public. What was released is potentially damaging to Mr. Mollway’s reputation and could subject taxpayers to legal fees if he decides to file an action against the Commission. After the firing was announced at about 1:30 p.m., Mr. Saito responded to questions from the press indicating that legal action was a possibility.

Instead of a simpler dismissal, in January the Commission asked Mollway to resign or retire. It appears that only after he declined did they start an investigation. The investigation resulted in the release of information to the public that may or may not reflect the discussions in executive session, but which had the result of publicly calling into question Mollway’s conduct and capabilities to run his office.

The reasons given do not appear, on the surface, to justify dismissal (see: Something smells bad at the Hawaii State Ethics Commission (6/8/2010) and Ethics Commission chastised in public testimony for its handling of action against Dan Mollway (6/9/2010) ). It would also be unusual, in the business world, to ask for someone to resign before completing an investigation. From testimony, it may be that some of the absences were protected for medical reasons. Testifiers also pointed out that the members of the Commission who conducted the investigation lacked experience in Human Resources matters.

Mr. Mollway was put on administrative leave in February, thereby depriving the public of his services. The annual legislative package could not be introduced, and Mollway was not available to consult on issues that usually arise during any legislative session.

As an example of issues that might arise, during the 2006 legislative session, Disappeared News filed one of two complaints with the Ethics Commission on “embedded lobbyists,” that is, high-level corporate executives hired as “interns” and working side-by-side with legislators in their State Capitol offices. As a result of Mr. Mollway’s response, corporate interns were banned from the Legislature the following session.

Because of the apparent flimsiness of the Commissioner’s public arguments, there would seem to be a strong public interest in understanding the reasoning and appropriateness of their course of action. The Ethics Commission is independent by design, which is essential to its ability to carry out its function, but perhaps it needs to remain accountable for its actions when they affect the public interest, as they have in this instance. Understanding what went on behind closed doors could give guidance for possible new legislation re-defining the Commission’s independence, at least with regard to personnel matters.

Will the Commission release the minutes of its closed-door executive session meetings? Not willingly. But the first step is to ask.

The new acting Director and her staff attorneys will be recognized easily. When trouble starts or extreme political power needs to be questioned or confronted, we will see their backsides and read their "no comments" while she runs like the wind. Following that, we will be treated to many "insufficient evidence" excuses when the chips are down.


I'm wondering why you say that... do you know something the rest of us need to know?