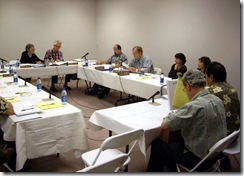 The State Ethics Commission this morning took up whether action will be taken against its Executive Director, Dan Mollway. The issue is an office complaint against him for absences which has been exploded into a potential removal action. Mr. Mollway has been on paid administrative leave since February.

I gave testimony as an individual at today’s meeting. It was similar to the article I posted yesterday. The heart of it was:

Mollway has served for 24 years. Something that happened between September and December would seem to be at most a minor glitch in a long career for someone so highly regarded.

In the corporate world, someone would just sit down with the employee and ask that the problem be corrected, or perhaps an HR (Human Resources) department person would do that, but it would not be grounds for dismissal.

I asked if there were some other reason that has been kept from the public but discussed in executive session, because the reasons given in public documents and news stories do not amount to an issue that merits the kind of investigation and attention that the Commission is giving this—so either there is something hidden that the public should know, or else there is a management issue with the Commission itself. I reminded them that after a period of time, even the minutes of the closed executive session will become public and we will find out.

Others added that Mollway’s evaluations had all been excellent, including the one conducted in 2009. Several people testified about the process, including questioning why the Ethics Commission picked on such a manini issue, or why the Commission is publicly airing something that should be easily handled off-line, sullying the reputation of the Executive Director.

Mollway was ordered in December to remain at the office for eight hours each day and to get permission of the Commission chair, who resides on Molokai, before taking vacation or sick leave. It seems he did so, which raises more questions about whether there is a hidden agenda that some on the Commission may have, and if they are using attendance/vacation time as an excuse to remove him.

One person testified that Mollway is an exempt employee who is on call at all hours and even while outside of Hawaii answers phone calls at all hours of the day or night.

Another testified that since he has been on administrative leave since February, the public has been denied his services [over a petty issue].

At the end of the open, public session, Mollway’s attorney answered questions from the commissioners. He also reminded them that several of their requests and actions were contrary to law, and cited the laws, including HIPAA, the medical privacy law. The Chair asked if they would want to make the complaint public without redactions, and the attorney said that if the medical information were taken out, they could do that. I think they are going to confer on how to make the complaint public.

I’m going to leave further details to the professional reporters who attended the meeting, hope you’ll understand. This is enough for this blog post for now.

At the end of the public session, the Chair asked for a motion to adjourn, which was made, so they could go into executive session. I just can’t keep my mouth shut. I piped up that if they adjourn, that’s it, they can’t go into executive session. They need to recess. This is the second time I’ve reminded them of what the open meetings law requires. So the Chair asked for the motion to be amended, then they ended the meeting. Enough, thought I, and left, without reminding them that they need to state the purpose of the executive session in the motion and record the vote. I did slip in that the commission should be aware of the laws that govern its activities.

From a summary of the open meetings law:

This requires a recorded vote, of course. It didn’t appear that they did that. They didn’t state the purpose.

Who will watch the watchdogs?

Great Article. By the way, who will investigate the zealousness of the Commissioner? Is the Chair a paid position or reimbursed/covered for travel, attendance, etc. Do they use these benefits for any other activities? Speaking of being "engaged", how much time are the Commissioners expected to spend on state business and how much do THEY spend in reality? Could we obtain a list of their decisions for the past year or two and find out which ones went against the advice of the Director or opposite him? What did he do to make them mad? What does staff want other than "career" advancement?


You ask many good questions, thanks for the thoughtful comment.

I've been asking around to try to find out who watches the commissioners. It may turn out that no one does. My best information right now is the governor, but I have not yet nailed down what powers anyone may have over them.