Johan Galtung’s view from Europe: A Multipolar Future of Regional Civilizations, U.S. May Divide in Two


Johan Galtung: A Multipolar Future of Regional Civilizations, U.S. May Divide in Two

21 Jan 2020 – Dr. Johan Galtung discusses his view of the future of the world and U.S. empire. He believes we’re moving into a peaceful multipolar world composed of regional civilizations, but not quite attaining “one world”. He sees Islam returning with a vengeance and the U.S. possibly splitting or dividing into two parts. 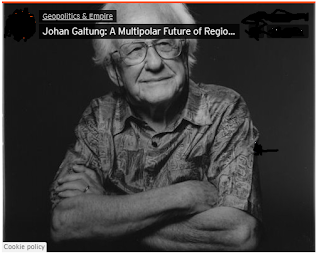 Johan Galtung, a professor of peace studies, dr hc mult, is founder of TRANSCEND International and rector of TRANSCEND Peace University. He was awarded among others the 1987 Right Livelihood Award, known as the Alternative Nobel Peace Prize. Galtung has mediated in over 150 conflicts in more than 150 countries, and written more than 170 books on peace and related issues, 96 as the sole author. More than 40 have been translated to other languages, including 50 Years-100 Peace and Conflict Perspectives published by TRANSCEND University Press. His book, Transcend and Transform, was translated to 25 languages. He has published more than 1700 articles and book chapters and over 500 Editorials for TRANSCEND Media Service. More information about Prof. Galtung and all of his publications can be found at transcend.org/galtung.