“
With each election cycle, it becomes more difficult to take Hawaii Republicans
seriously as a major political party. –Volcanic Ash, 6/10/2018

One can argue that it is a good thing to have a “loyal opposition,” and that Hawaii’s state government has not had that for some time. So should the state Republican Party be revived somehow? It’s actually too late, the GOP expired here some time ago. Some still cling to its ghost as though it still were alive.

It’s always been elephants vs. donkeys with a few strange animals at the fringes.

The GOP’s irrelevance is most apparent in the Legislature, where it now holds none of 25 Senate seats for the first time and a historic-low five of 51 House seats.

There have actually been no GOP members of the Senate for several years now. When there was only one, the Senator was respected but powerless as he took ideologically-based positions on each bill under consideration.

It’s time to move on. Like it or not, we have something different here.

Hawaii is uniquely positioned to demonstrate that the failed rivalry between Republicans and Democrats is not the only, and certainly not the best, model of state government.

The parties still caucus separately and hold their conventions as in any other state. Candidates still receive some national support because the two-party system is alive, if not well, nationally. Also, the two-party mindset, which has been with us for countless generations, is difficult to dislodge. It’s hard to visualize a political system without that convenient split.

So what do we have instead?

We have a political system free of polarizing ideologies. A nominally Republican House member supports renewable energy and the environment. A nominal Democrat (who used to be a Republican) opposes marriage equality. We do not condemn them for not toeing party lines. The ideologies can be held by anyone.

The closest model I can find is the ancient Tokugawa Shogunate in Japan. It was a system based on accumulating power and rank, not by party divisions. 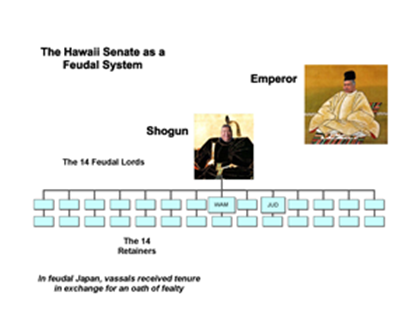 There’s an emperor up on the fifth floor—the Governor—but the extent of his power is questionable.

The real power is wielded by the shoguns (Speaker of the House and President of the Senate) and the major daimyos (feudal lords, the chairs of the powerful Finance, Ways and Means, and certain other committees).

This is far from an ideal arrangement, but it could be at least the beginning of something better than the two-party split. It will take public pressure and rule changes to end the abuses of the current system. Perhaps a constitutional convention, if one is held soon, as is a possibility, could straighten out the kinks and tame the power of the lords and ladies.

There’s no question that there are major abuses including blatent ethical violations and constitutionally questionable procedures. Those in power, as we see so vividly on a national scale, don’t feel very much bound by ethics or even the law.

No fewer than a reported 77 fundraisers were held during the just concluded legislative session, perhaps a record number. Usually these are held not in a representative’s district but in a handful of Honolulu restaurants convenient for lobbyists and business interests to attend. The per-plate donation requests are often way above the budget of ordinary constituents.

Of course, bills are still moving through committees that these lobbyists support or oppose, hence the ethical issue.

Those in power here seem to have a disdain for political ethics (and there are other examples).

The state constitution requires that a bill have three readings but in each session many suffer a “gut and replace” procedure that replaces the wording of a successful bill with one that did not make it that far but which the leadership wishes to advance anyway.The successful bill effectively dies. So far there has been no remedy in the courts, and the judiciary is perhaps unlikely to interfere with legislative procedure. The maneuver is hidden on the state capitol webpage so as to shroud it from public view.

This session saw the Shogun [Speaker] of the House pull conference committee members at the last minute when it looked like bills he didn’t like would pass, thereby trashing the many hours of testimony submitted during session supporting those bills. It costs real money for Neighbor Island residents to fly to Honolulu to attend committee hearings—their time and investment (and perhaps willingness to participate further in the legislative process) is hijacked for who-knows-what purpose. This is not how a fully-functioning, healthy democracy is supposed to operate.

Even the constitutionally-required “three readings” are a sham.

So we could do with some work to improve our system of governance, but the raw material is there and the obstacle of the two-party division is gone.

We can build on what we have instead, improving it, perhaps with a top-two voting system as David Shapiro suggests in his column today, along with other safeguards to eventually end the feudal power structure.

The opportunity is here for us to create a truely democratic state government.