I learned quite a bit as a board member and past president of a senior advocacy organization (Kokua Council): many elders don’t tweet, many don’t access the Internet very much or at all, and some still have flip phones.

This will change as the generations advance, but it’s where we are now.

And those who want to stay active politically in Hawaii depend on the public access channels for information and to monitor legislative hearings.

Now it seems that Spectrum, which gobbled up Oceanic Time Warner, wants to snatch the analog `Olelo channels (including Capitol TV) and banish them to upper digital assignments with new numbers. 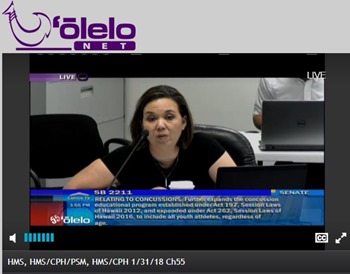 Capitol TV broadcasts are listed on the state capitol website (here) and many people, particularly those who live far away or who have mobility issues, depend on these broadcasts for information on what our lawmakers are up to.

In the past it was a rule (federal?) that the public access channels had to be available to the lowest tier of subscribers. That’s still analog—those who have one or more TVs without digital access. These days Spectrum is still subject to regulation, but whether the regulating body, the Department of Commerce and Consumer Affairs (DCCA), will stick up for cable users is not known. At least they should hear the voices of the users on this plan.

The issue is on the next agenda and public testimony is accepted in person or via email.

The meeting is Friday, February 2, right in the magical “news hole” of 5 p.m., the time when politicians release statements they don’t want to see in the next day’s paper. In Hawaii it’s pau hana time on an Aloha Friday. I suspect they hope few people will show up.

I’d rather be elsewhere, but I’m going to the meeting to urge that the DCCA not allow the cable channel move. Won’t you join me?

Written testimony can be sent to DCCA Cable Television <cabletv@dcca.hawaii.gov>.

If you didn’t know about this change, you’re not alone. It could start as early as February 6. I have not been notified by Spectrum but did see an op-end in the Star-Advertiser (which is locked behind their paywall, sorry).

I did call Spectrum and learned that digital adapter boxes will be required for TVs that do not already have them. Here’s where many older people will get cut off. Most of us will have no trouble installing the boxes, but some people will not be able to cope. Imagine grandpa or granny, who do not yet even have a cell phone, wielding a wrench and arranging one more electrical power connection. They may not even have that wrench.

Or granny or grampa can pay $49.99 for installation.

Undoubtedly, some viewers will choose to just do without.

Spectrum could (and should) just leave the channels where they have been for around 20 years.

If you think the channel move is wrong, send a comment to DCCA Cable Television <cabletv@dcca.hawaii.gov> before the hearing. If you can, come down to the meeting location (see agenda) and weigh in personally.

Oh… I nearly forgot. In the future Spectrum could begin to charge for the digital adapter boxes. Isn’t your cable bill already creeping up a few bucks every so often? If they can charge, they will, and older folks are often on a fixed income.

Your voice can make a difference. Please send an email or come to the hearing if you can.