Honolulu is making little to no progress in solving its chronic housing shortage--a problem which has been recognized in the press as a crisis at least since 2003. It's time we pushed our elected leaders to commit to firm plans for creating the 20,000, 24,000 or 60,000 rentals that will be needed according to the time frame and who is expounding on the subject.

Waiting for Santa Claus to fly over the Honolulu rail route one day and deliver "affordable housing" does not qualify as a viable plan.

Newspaper articles equating 140% of AMI (Area Median Income) as "affordable" are counter-productive when homeless or near-homeless need housing at 30% of AMI. The lack of journalistic honesty takes pressure off of our elected officials (City Council and state government) to develop concrete plans. Government lets the crisis slide along, and instead put its energy into the gentrification of Kakaako and Waikiki. That of course benefits mainly the ultra-rich and the Whole Foods-type of merchants that the well-off need to enjoy whatever number of months they actually stay in their expensive condo apartments.

In the face of competition from those with generous military housing subsidies and the burgeoning Airbnb-type of vacation rentals, the low- and medium-range of rentals will continue to fail residents who are trapped by the low paying jobs prevalent in Hawaii.

In the absence of adequate Section 8 housing and some form of rent control, the best-laid plans, even if they existed, would fall short.

But there is no plan to resolve what is arguably the worst crisis of homelessness since the Great Depression. Rents continue to rise and wages continue to stagnate. Other costs of living increase inexorably as well. Much of our population lives on fixed incomes. There need for realistic plans at a scale that has a chance to make a meaningful difference. Neither our city nor our state have promulgated plans that their constituents can hold them to.

It's important to acknowledge that the housing crisis was recognized at least as far back as 2003, with several newspaper articles at that time calling for action. Yet none was forthcoming. Here's an article from November 16, 2003: 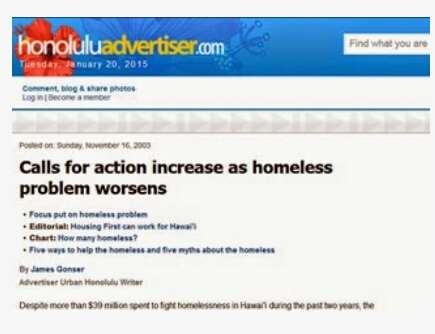 Just as the rail project is viewed by many as a con against the public perpetrated by citycouncilmen beholden only to the development community who pay the largest share of their campaign contributions, the concept that "Transit Oriented Development" will provide much in the way of low-income rental units is also a con.

Bullet points on a PowerPoint slide do not amount to an actual "plan". A plan typically has a budget, personnel assigned or need recognized, a timeline, etc. All measurable, of course, so those in charge can be held accountable to it.

There is no Santa Claus. The hoped-for housing that's needed will have to depend on the ingenuity and dedication of urban planners working for the people instead of wishing for progress led by developers and their agents in city government. So far, government shows no signs of delivering.

The media could fulfill an important role, if it were also dedicated to the needs of newspaper readers instead of newspaper advertisers. They could document how many housing units are needed in each rental bracket and give up on the bogus "affordable" narrative that currently dominates articles.

We need to get all hands on deck to solve this so-far intractable issue.